Mrs. TBF and I went out with the NY real estate agent yesterday afternoon, and we looked at four homes in the White Plains area. One of the homes had just accepted a contract, so that one didn't really count (and Mrs. TBF didn't like it anyway). After looking at the three main candidates, we managed to come up with the NY finalist. And, here it is: 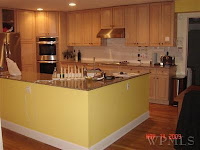 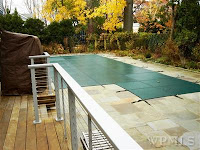 Other than the fact that the entire interior needs to be repainted (i.e. the entry foyer is really, REALLY orange!), and we don't like the exterior color (but the paint is in good shape), it's a pretty nice house.
And get this: the house was owned by Germans who have moved back to Germany. In something that struck me as funny, the Germans were afraid of the gas cook top, so they converted it to electric.

Cook top aside, the kitchen is really nice, the layout is great, the rooms are generous, and (something that appeals to me more than it does to Mrs. TBF) it has an pool and hot tub!

In about an hour, we're going to head out together to Connecticut to look at the six potentials from the 25 or so that I saw with the realtor on my own. And in my opinion, all six of the homes are nicer than the NY finalist.

And Then There Were Nine...

One of the first orders of business in our new home, other than Mrs. TBF starting her job, is to find a place to live. Right now, we're living in a company provided apartment, but eventually we'll move into our own home - hopefully before the 60 days of company-paid-for apartment living turns into us-paying-for apartment living.

Overall, the apartment isn't too bad.

So, while Mrs. TBF has cut her teeth at her new company, I have been going around with two real estate agents - one in CT, and one in NY - trying to narrow down the list of potential homes we've compiled over the past couple of months.

Let me tell ya, it's no easy task.

First of all, it's a real buyers market out there. That means that there are tons of homes to choose from. Secondly, I've liked A LOT of the homes I've seen in both CT and NY, and it's hard to choose between the two states.

The Connecticut homes I've seen tend to be sprawling homes on large wooded lots and a 15-20 minute commute to Mrs. TBF's office. The New York homes (Mrs. TBF's office is right on the border between the two states), while being only 5-10 minutes from the office and White Plains shopping, are more suburban and the taxes are much higher.

Do we go with a little less convenience and lower taxes, or do we go with ultra-convenient and high taxes? As I said, I've liked the actual homes in both states.

Oh... and let me back up a bit by saying that we originally thought that we'd rent for a year, decide where we wanted to live, and then buy a house. Then, given the buyers' market and low interest rates, we decided that it was best to buy a place right away. At first, we thought we wanted a small condo or townhouse, and then we changed our minds and decided that we'd go for a smallish home. Now, we're pretty much looking at homes that are WAAAAAAAAAY larger than we need with properties that will require me buying a rider mower or hiring a landscape crew.

What the hell happened????

Did you ever think I would blog again?

Oh, ye of little faith! I'm back with a vengeance!!!

Ok, maybe not a vengeance, but I do plan on blogging again on a quasi-fairly-semi-regular basis.

What's happened since my last post lo those many months ago?

We've been to Paris, Chicago/Florida, Milan, Lisbon, Amalfi, and then back to the U.S... permanently!

Yes, you read that correctly. We have moved back to the U.S. In fact, we just arrived in NY this past Sunday, so I guess you can say we're "just off the boat." Or, in this case, the plane.

We're currently residing in temporary housing while Mrs. TBF begins her new job, we feverishly shop for a house, figure out what kind of car(s) we're going to buy, figure out where we're going, etc., etc.

We have a million things to do, but we're REALLY excited to be back.

The move went well, we said temporary goodbyes to friends (some are coming to see us in a couple of weeks), and enjoyed our last couple months of Swiss residency.

Email ThisBlogThis!Share to TwitterShare to FacebookShare to Pinterest
Labels: a new chapter, back to blogging, back to the U.S.A., God bless America
Newer Posts Older Posts Home
Subscribe to: Posts (Atom)