...are the luckiest people...in the world!

She flew in on Tuesday, spent the night, had meetings on Wednesday, left on Wednesday evening, and slept for five hours on the return flight between NY and London.

Me? I went to bed at 3 a.m. on Tuesday night/Wednesday morning because I got sucked into a couple of really bad movies. Yes, at one point I found myself watching the Ann Jillian Story and felt that the only two options at that point were to either throw myself off the balcony OR go to bed, wake up the next morning, and pretend that it was all just a bad dream.

I chose the latter.

On Wednesday evening, I once again began to hear the sucking sound of the movie channels. However, the lack of sleep the previous night caused me to begin dozing on and off on the sofa, and I eventually stumbled to bed at the more reasonable hour of 12:45 a.m.

Yesterday evening, Mrs. TBF returned to Basel (Thank God!), and not empty-handed I might add. 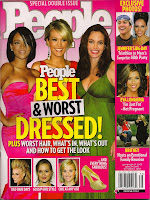 Along with some hotel shower gel for me to use at the gym (I rarely have to buy shower gel), and a bottle of Tanqueray No. 10 from Heathrow Duty Free, she also brought home the latest issue of People magazine. I'm usually more of an Us fan, but Mrs. TBF knows that I LOVE the Best & Worst Dressed issue.

Of course, having lived outside of the U.S. for nearly eight years now, I haven't the slightest clue who many of the people are (Kim Kardashian, Leighton Meester, Selena Gomez, Mario Lopez, Ellen Pompeo, Diane Kruger, Kristen Bell, etc., etc.). But hey, it doesn't matter. It's still good reading.

This morning, while Mrs. TBF was getting ready for work, I came across a feature called Chic at Every AGE where they showed ten celebrity women in their 20s, 30s, 40s, and 50s. Suddenly, I found myself blurting out:

"You know what? Maybe I'm getting old, but I think the women in their 50s are the hottest looking group! As a matter of fact, I think I'd rank the 50s as the hottest, followed by the 40s, 30s, and then the 20s coming in last."

Of course, Rihanna wasn't included in the 20s group because she had been featured in The 10 Best Dressed section.

I don't know...Rihanna coupled with Scarlett Johansson and the also-rans that made up the rest of the 20s group would probably have bumped them up into third place....or maybe even second. And...

Can't remember the last time I read People's mag, but it's a long way back.

Oh, and the balcony is where King has his water supply (plant), if I remember correctly.

Oh if only she had been a week later you would have found out that Clay Aiken is gay....who's Clay Aiken you say? Exactly!!!

TBF, I am so sorry that you were tramatized by the movie night you had the first night and what did you not learn the 2nd night from the 1st night!!!!!!!!!! It is nice to know that I am not the only one that does not know half the people in the magazines these days, like who the helvita is Selena Gomez? OBTW, did you enjoy your homemade pasta last weekend? ESP

cs - King's plant is in for the winter. He's happily drinking water from the saucer in indoor comfort.

michael - I actually read that on Google news, and I actually DO know who Clay Aiken is - although I've never heard him sing.

ESP - The homemade pasta was great. Tonight, Mrs. TBF is making me steak tartare, and we're having some risotto. En guete!