You Are Now Free To Move About The World!

My "get of jail free" card (as Mrs. TBF has been calling it), just arrived via registered mail.

MY NEW CANADIAN PASSPORT IS HERE!

I am VERY happy about it! Not only am I now able to venture outside of Switzerland, but I am also now all set for my trip to the U.S. at the beginning of next month. 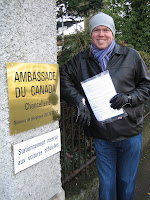 Last month, the day after getting back from London, Mrs. TBF and I took the train to Bern so that I could drop off my passport application at the very low-security (at least when compared to the fortress that is the American embassy) Canadian embassy. When we arrived, we had to wait out front for a few minutes because THEY WERE CLOSED FOR LUNCH, but at about 1:01 p.m. we rang the doorbell.

Embassy lady (over the little speaker): Hello. May I help you?

TBF: Hi. I'm here to drop off my passport application.


We went into the lobby (nobody was there except for us), I submitted the application, paid the fee, and...that was about it. Oh...we both used the lobby bathroom. So, since I think entering the embassy meant that we were both legally in Canada, I can proudly say that we both peed in Canada that afternoon before walking back out into Switzerland. Fortunately (for the embassy's janitor), I was over my stomach flu (before coming down with it again a few days later) by that point. 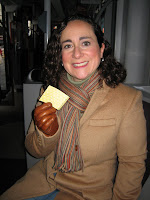 Actually, I guess there was one bit of excitement on the way back to the train station: we were both asked to show our tram tickets by Bernese tram inspectors doing a random inspection. Yes...OF COURSE we had valid tickets! I think I was only inspected three or four times during all of 2008 in Basel, and then were inspected in Bern on the one day we rode their tram. What are the odds? 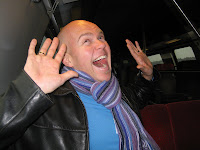 After a quick, exorbitantly-priced pizza lunch at the Bern train station, we hopped onto the train for the return trip to Basel. As you can see, I was elated that I could now cross "submit passport application" off of my things-to-do list and focus on things like doing laundry, shopping, cleaning King's litter box, and vacuuming.

Congrats on being free to travel in 2009! YAY!! Can't wait til I get my French passport one day... I am headed STRAIGHT for Cuba (my grandpop grew up there). Glad you are over the s. flu! Take care and say hi to Mrs. TBF.... Leesa

Congrats on the new passport!

I'm thinking I have roughly 1 year left before I can apply for my Canadian Passport. It's also 1 year until I should start applying for that American one too...

Sounds like it was quite a nice trip to Bern. I went once with my friend and wasn't even aloud to go in with her.

All right! I know what you mean about getting a little fidgety while you're waiting. We can mail in our applications to Berlin and they do the rest so it's just a short trip to the post office.

christina - We can also send ours in, but I wanted to hand it in in person just to make sure that everything was ok AND to get the ball rolling. Since it was right before Christmas, I just wanted to make sure that it wouldn't sit on somebody's desk for a week or two.