It's been a real sickbay around here lately. 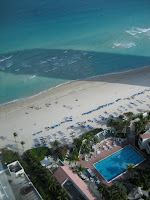 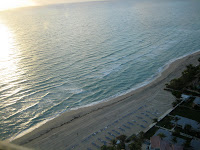 First, I came down with a cold. It wasn't anything too bad: just a bit of a cough and gallons of snot. Then, Mrs. TBF got sick AND actually stayed home from work for two days. We started feeling better, Mrs. TBF went off to Miami on business (where she enjoyed views like these from her hotel room), and we thought the worst was behind us.

The last day Mrs. TBF was in Miami, she told me that she was starting to not feel well again.

When she arrived back in Basel, she had... a cough and gallons of snot. Then, rarity of all rarities, she actually stayed home from work for two days in a row...AGAIN!

By the end of last week, I was completely over my cold and Mrs. TBF was on the mend... again. Then, our friend Tom, who was in Basel on business, came by on Friday evening for dinner and to spend the night before flying back to the U.S. the next day. He arrived at our place around 6:30 p.m.

As he stepped out of the elevator, here's what he said:

At first I thought he meant he had actually dropped a deuce in a snow bank in front of our place, but then I realized that he had blown chunks. In he came, wheeled his bag to his room, sat down (as white as a ghost) in the living room, and enjoyed a pre-prandial cocktail of... Perrier. That was a bit too harsh for him, so he switched to plain tap water.

By this time, Andy, Di, and Jeanette had also stopped by. Tom gave it his best shot, talked with everybody for a little while, then... went to bed without a bite to eat and slept until Saturday morning. On Saturday morning, he took a taxi to the airport, and then flew back to the U.S.

Jeanette, Andy, and I all came down with stomach flu over the weekend. I wasn't too bad, but Andy and Jeanette actually had to stay home from work on Monday.