I went to the BASELWORLD Watch and Jewelry (BTW...the Brits spell it "jewellery"...Wankers!) Show, and OH...MY...GAWD was it boring!!!! Had I known how boring it was going to be, I would have saved the CHF 45 ($35 U.S.) one-day admission fee and just checked out the watches on the internet. Save yourself the money and just go window shopping in downtown (...insert name of big city here!).

I showed up at 15:00, and I thought I could last maybe two to three hours. And? I barely lasted one! MAJOR...LEAGUE...SUCKAGE! I left at just after 16:00, and I would have just given my ticket to an enemy of mine (if I had one) just to subject him/her to the torture I had just endured, but there were big signs warning people that the tickets were non-transferable, and anybody caught giving or selling their ticket to somebody else was subject to "a fine"!

By the way, I'm sure most non-German speakers don't know that the German word for jewelry is Schmuck! That's right, like when Americans are calling somebody an idiot by calling them a schmuck. However, the Germans pronounce it more like shmook. It always cracks me up to walk around Basel and see the signs that say Schmuck in big, bold letters.

But, getting back to the show...

There were only two highlights for me. The first highlight was that, for whatever reason, there were A LOT of Finns at the show. I heard Finnish being spoken all over. About five minutes after entering the show, I overheard three Finnish guys (who were obviously in "the business") dressed entirely in black, with long shoulder-length straight hair, soul patches, and crazy-ass Euro glasses talking complete SHIT like they were important or something...so I followed them.

I pretended to be seriously interested in whatever watches they were looking at while I listened to them droll on...and on...AND ON in Finnish about chronometers, Swiss movements, mechanisms of various sorts, profit margins, etc. Just when I was becoming rather impressed with my stealth, I noticed that they had stopped talking, and...

...ALL THREE OF THEM WERE STANDING FIVE FEET IN FRONT OF ME...AND THEY WERE STARING RIGHT AT ME!

Busted! I'm not really sure what tipped them off, but when I looked at their faces, let's just say that I did notice that there were certain similarities in our facial features. I think they had recognized me as a Finn. It was time to move on... 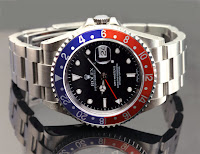 The second highlight was the Rolex exhibit. I picked up a Rolex catalog, and Mrs. TBF will be happy to know that I've picked out my next watch. Allow me to present...the Rolex Oyster Perpetual Date GMT-Master II!!!! I'm not sure yet if I'm going to go with the "F-YOU Corporate World/Pepsi Can" colors, or if I'll opt for the safer black face/bezel with silver/gold band. However, I'm pretty sure that this is the watch for me because I'm geeked about the fact that the "rotatable bezel, 24-hour hand and independently adjustable 12-hour hand allow simultaneous use of any two time-zones."

Considering what the Rolex will cost, CHF 45 is not such a bad deal after all. BTW, did you also take time to look for a nice present for MRS. TBF's birthday?

I have met people who I knew immediately were Finnish. The Finn's have a very common look. Even the women look like you in a dress.

I love the Schmuck signs, however I think the "Lotto Lose" signs are just as good. And people wonder why we Anglophones never play the lottery here.

Thanks for the info on BaselWorld, I'll make sure to spend my time doing something more worthwhile, like housework.

Wait a minute, were you at the same INSANELY exciting CSI-mystery-intrigue-sexytime-romance watch fair that this guy was?

Jul - A bezel is the ring that surrounds the crystal on a watch. And yes, I was at the very same watch fair to which the article refers. Maybe people thought I was an inspector since I was one of the few people not dressed in black (bright green Lacoste shirt!).

Greg - Good eye on the Lotto signs; I also think they're pretty funny.
Tip: Nice strawberries and rhubarb at Coop. Time for you to be baking a pie?

And if you are looking for Schmuck AND Uhren, you might one to consult the big authority on these. Which happens to be Christ... http://www.christ.de/shop/

Is there any doubt that the unnofficial religion of CH is $$?

On an unrelated note - revised my last blog so as not to offend my Basel bretheren.

Indeed it is a lovely town!

mbnsl - I just can't get myself to buy a watch with a brand name of Christ. Now if it squirted blood into my palm every hour - simulating stigmata - then it would be another story!
Also, I don't think it was necessary to revise your blog. There's nothing wrong, as far as I'm concerned, with offending people. I think peoples' skins have become too thin in the last few years. Basel is worth at least one visit, then it pretty much sucks after that. Zurich kind of sucks after the second or third visit. It's pretty much just like Basel (boring)...only bigger!

I went to the show in 2004 and thought it was so boring too. In fact, I really couldn't understand why so many people make a big deal out of it... But I love watches...

And the conversation story was just too funny.. I try listening into the swiss german conversations I usually hear when I take the seabus...

I had a guy stop me in the street today to ask me (in English) if I could tell him what the sign on the door of a shop said. He looked SO Finnish and had the accent, so I asked him in Finnish if he spoke Finnish and his mouth dropped open. We chatted for a bit (he was here for a basketball tournament), and it was so great - I know French is supposed to be such a beautiful language and all that jazz, but I really miss hearing Finnish.

I always thought people who said it "jew-lery" were wrong. I have always pronouced it "jewel-ry". Now that I know the Brits spell it differently, I guess maybe I'm the one who actually doesn't say it right. Huh.