I've been feeling a bit lazy lately (What else is new?), so rather than taking time to put some thought into an interesting and witty (Why start now?) post about our recent trip to London, I'm going to just post some pictures and write the first things that comes to my mind.

Minimal effort with (hopefully) stellar results. Hmmmmm...kind of reminds me of when I had a job... 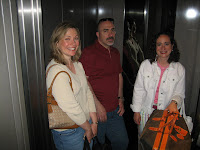 Fires were successfully lit under the Colon Blows' asses (no explosions!), and we not only met, but exceeded, our goal of leaving the apartment by 5:30 a.m. Kudos to our houseguests! This picture was taken on the way down to the parking garage at 5:22 a.m. The sister-in-law (S.I.L.) and Mrs. TBF are looking fairly chipper, but the B.I.L. is not looking too happy with the fact that he had to wake up at...4 a.m.!!!! 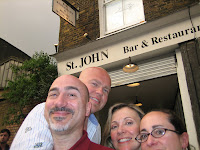 We had, in my opinion, one GREAT and two decent meals in London. This picture was a self-portrait taken right before we went into St. John for dinner.

This was the second time Mrs. TBF and I had been to St. John. We heard so many great things about it, and were a little disappointed when we ate there a year ago. Thinking we might have just hit them on an off night, we decided to give them another try. And??? Good, but not great. Perhaps I was disappointed by the fact that they were out of the roasted bone marrow starter (the best thing I had last year), but I just don't think the restaurant lives up to its hype. We also had a curry dinner at an Indian restaurant called Veeraswamy which was also good, but not worth a return visit.

My recommendation for a GREAT place to eat the next time you're in London? Go to Galvin Bistrot de Luxe at 66 Baker Street for their prix fixe lunch. The food was absolutely great, and at 15 pounds it has to be the bargain of London. 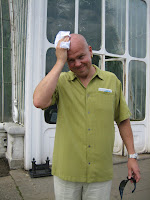 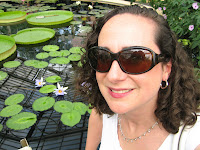 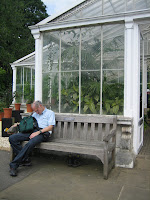 On Friday, the B.I.L. and S.I.L. wanted to see things that Mrs. TBF and I had already seen on previous trips to London. So, while they were checking out the Tower of London, St. Paul's, etc., we took the Underground out to Kew Gardens.

Being a gardening geek, I figured that I'd like Kew...and I did. However, it had the added bonus of being right in the flight path of Heathrow. So, seeing how living a few miles from Basel's airport has turned us both into airplane geeks, we had the best of both worlds: horticulture AND screaming jets coming in for a landing right over our heads about every sixty seconds or so. The weather outside was balmy (especially for London in May), but the Palm House was like a freakin' sauna! I lasted about fifteen seconds in there. It had to be 38˚C/100˚F in there with 100 percent humidity. Being a Finn, I certainly love a good sauna, but...NOT WHEN FULLY CLOTHED. A little while later - with my shirt still clinging to my torso, I managed to take this nice picture of Mrs. TBF in the Waterlily House which was a little more manageable temperature-wise.

Of course, looking at plants can be exhausting. This chap found a nice spot on a bench to catch a few Zs...with his comb-over flapping in the breeze. Naturally, I just HAD to snap a picture so he could have his fifteen minutes of fame in the Blogosphere! 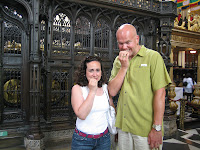 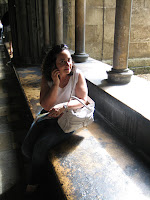 Later that afternoon, Mrs. TBF and I made our way to Westminster Abbey. The last time we were in London, we arrived at Westminster about two minutes after their unreasonably early closing time of 3:45. This time, we knew better and arrived with plenty of time to spare. Once inside, we (rather nervously) disobeyed the "No Photography" signs and snapped this image of us using the timer. Then, a bit later, we took another illegal photo of Mrs. TBF illegally using her mobile phone. HEY!!! Show me in the Bible where it says you can't take a picture or use a mobile phone in a f***ing church!!!

Going to church really worked up a king's thirst for the frosty brew, so we stopped at a pub for a bit of ale. First, let me say that I like English ale. However, I like it colder than English pubs serve it up. I know it's not supposed to be ice-cold, but...is it asking too much that it be served just a little cooler than room temperature? Maybe the cellars were warmer than usual because of the warm temperatures outdoors - I don't know. Whatever the reason, I ended up having to switch to that other "English" beer - Stella Artois. Let me tell ya, the Brits sure love their Stella. Plus, they like to order it in the pub and then take it outside where they just stand around drinking in the street. I guess that's what one does when the weather is nice in a place where it rains all the time (except when we're there, of course!). 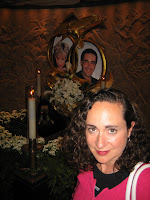 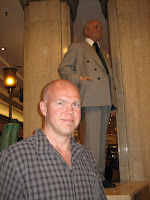 On our last day in London, the four of us went to Harrods. I bought some clothes, we bought a couple of mother-of-pearl caviar spoons, I got me a Harrods Rewards card, we visited the Di and Dodi memorial, and I manged to be severely spooked by the VERY life-like wax figure of Al Fayed. I'm telling you, I stood there for several minutes staring at "him" to see if "he" would move - it's THAT life-like. 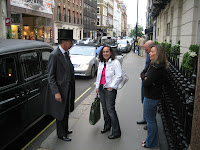 Alas, the time came to head off to Heathrow for our flight back to Basel. We had a last pint at a pub, and then we walked around the corner to our hotel where we found that our taxi was already waiting (five minutes early) with our bags already loaded inside. How's that for service? We said our farewells to the friendly doorman, and then off we went. While we were on our way to the airpot, Mrs. TBF suggested that we should go to London "...at least a couple of times per year."

...And that's to go along with Paris a couple of times per year!!!

For the record, I didn't even break the slightest sweat in the palm house.

And...that's to go along with Amalfi at least once per year (...although I guess we're skipping this year).

It looks like we're going to be busy travelers!

I simply love Harrods! I could shop there for my life! Food and clothing... Only who will pay for all of this??