To Shave, Or Not To Shave?

That is the question. 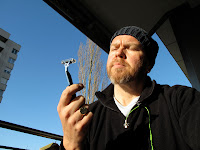 Hey, what can I say? Every now and then, a guy needs to give his face a rest. Plus, I like to check on the progress of the gray whiskers every now and then. Verdict: a little more gray than the last time I had a beard (January 2007), but not too much more.

Not only have I not shaved, but I haven't even trimmed the beard. It's beginning to get a bit unruly, so if I do decide to keep it I'll have to give a bit of a once over with the scissors. Another thing for me to consider is that shaving my face reminds me to trim the ear and nose hairs, so those may be getting a bit on the wrong side of acceptable.

Ummmm... ok. I think I've answered my own question.

We'll Be Home For Christmas...

One week from now we'll be well into North American airspace on our way to Chicago for our Christmas vacation. It'll be our first time in Chicago for Christmas since 1999.

Can you believe it???

We were actually talking back in January about going to Tokyo this Christmas, but Mrs. TBF mentioned Chicago as a possibility, and Tokyo pretty much never came up as an option again.

Since we're actually going to be in Chicagoland for a full two weeks, we thought it would be nice to get out of the suburbs and head into the city for a couple of nights. We'll be doing our little part to help the U.S. economy by spending money on a hotel, Christmas shopping and eating at nice restaurants. Vienna, Rome, Paris, and London have been the recipients of our Christmas spending over the last four years. This year, we're bringing the money back home and spending it in Chi-town!!!

It still floors me that the last time we were in Chicago for Christmas, everybody was talking about Y2K. Remember that? What a bust! Just another thing - along with backyard bomb shelters, the oncoming ice age, and acid rain - collecting dust in the over-hype warehouse. I heard something about the warehouse men getting a spot ready for man made global warming. I'd ask them, but they're taking a break right now (damn Teamsters!). We'll just have to wait and see, won't we?

At this time way back in '99, we had neighbors who had bought a whole-house backup generator, people were stocking up on food and water, the end of the world was nigh, and we didn't even have an inkling of an idea that we'd be living in Switzerland less than a year later.

Here we are ten years later, and Y2K is a distant memory. Instead, I'm focused on B2A: BACK TO AMERICA!!!

The Final Word On Dieting And Hooter's Wings!

People find my blog every single day by doing a search for "hooters wings weight watchers points" or some version of those words. Why? Because I've blogged about Hooters Wings and Weight Watchers... DUH!

If you're on any kind of weight loss diet - Weight Watchers or ANY other diet - you WILL NOT lose weight if you eat Hooters Wings. If you convince yourself that you will, you're just lying to yourself, and... that's not good.

This past Saturday evening, we had a long-overdue birthday dinner for the Switzerland-base, British Dr. John. Since we were the ones who introduced the Dr. John family to Hooters Wings at the Hooters in Norfolk, VA last summer - where Dr. John labeled them at the restaurant (in an embarrassingly loud voice) as being "Maaaaahhhvelous!" - we thought we would surprise him, along with Dr. Rammy, by making them some homemade Hooters wings for his belated birthday dinner.

I did a quick internet search for Hooters wings recipes, found a few suitable recipes, and picked out the one that I thought was the best.

If you look at the recipe, you'll find that not only are the wings breaded and deep fried, but...

AFTER REMOVING THE WINGS FROM THE FRYER, THEY ARE TOSSED IN A COMBINATION OF A 1/2 CUP OF BUTTER AND A 1/2 CUP OF HOT SAUCE!!!!

Let's see now: deep fried wings tossed in butter before serving? Ummmm... you're not going to lose weight eating those. Nope... you're just not! But... just in case you do. You'd better head to the doctor to have your thyroid checked!

Email ThisBlogThis!Share to TwitterShare to FacebookShare to Pinterest
Labels: British Dr. John, convincing yourself that you're on a diet when you're really not, eating things we know are bad for us, Hooters wings, Weight Watchers

ESPECIALLY after you've been without hot water for 24 hours!!

That's right, HEAD FOR THE BOMB SHELTER!! We were without hot water for 24 hours last week from Thursday to Friday!

Is it the beginning of the complete breakdown of Swiss society as we know it??? Probably not, but THIS may have been!

Other than the fact that Mrs. TBF had to take an ice-cold shower on Friday morning before going to work (I just showered at the gym), in hindsight, being without hot running water in Switzerland proved not to be too big of an inconvenience. You see, both the washing machine and dishwasher have their own built-in heating elements, and therefore only have cold water feeds. Of course, I didn't think about this until about 20 hours into the 24 hours, so I guess... YES! It was rather inconvenient being without hot water. But next time - IF there ever is a next time - I'll be ready.

It's when things like this happen that I realize one of the major things I like about owning a home as opposed to renting: having complete control over a situation.

As a homeowner: I would have called a repairman, he/she would have shown up, and the problem would have been solved.

As a renter: I called the absolutely-no-sense-of-urgency rental office, the person told me that they would relay the message to their colleague, and then I proceeded to sit around with my thumb up my ass. Every fifteen minutes or so, I would remove said thumb from ass to walk over to the faucet to see if any hot water was coming out.

Finally, I got tired of waiting, so I went to talk to my downstairs Swiss neighbor who speaks absolutely ZERO English. Somehow, through a complicated system of semi-German words, grunts, and charades, I managed to ask her to call the management office to see if she could make any headway with them. I headed off to the next-door grocery store to buy a couple of things, and when I returned a few minutes later there was already a note from my neighbor stating that the repairmen were now working on the problem, had not yet determined what the problem was, but assured her that the hot water would be working by the end of the day.

By 3:30 on Friday afternoon, there was still no hot water, and I was getting nervous. Was there a chance that we'd have no hot water for the entire weekend??? I decided to head of to the gym for a workout, shower, and a good thumb scrubbing. When I returned home, the hot water was back on.

Email ThisBlogThis!Share to TwitterShare to FacebookShare to Pinterest
Labels: communicating with the Swiss, no hot water, owning vs. renting, the breakdown of Swiss society

Waste Not Want Not

I've read a couple of articles this past week about how much food the average American wastes. Alarmingly, the figure is something like 40%!! You can read a short article about it right here if you wish. The amount of fresh water and oil needed to produce the food that is just thrown out is staggering.

Why do Americans waste so much food? In my opinion, there are three major reasons:

1. Food is too cheap.
2. Refrigerators are too big.
3. Food being sold in too large containers (i.e. "extra-value-economy sizes").

Here in Switzerland: our food is expensive, refrigerators are small, and food is sold in small quantities. Guess what?

We rarely waste any food.

In fact, I would say I'd be overestimating if I said we throw out food more than once or twice per year. The last time? Last week: I threw out a tiny jar of cloves that had an expiration date of 2002! Other than that, I can't remember the last time.

So, here are some tips:

Buy only the food you intend on eating. If you have have leftovers - EAT THEM the next day, or stick them in the freezer! Don't buy massive containers of food. I mean, do you really need that gallon jar of pimento olives from Costco? 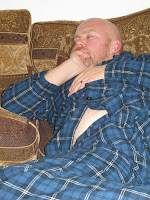 Oh, and here's another tip that I practiced this past Sunday night. Rather than leaving leftovers, just eat until you're ready to burst, fall into a deep coma, and become as one with the sofa in front of the TV until it's time to go to bed.
Posted by The Big Finn at 12/01/2009 05:55:00 AM 3 comments: