Not A Total Waste

Suuuure I've had a mild cold for the past week, and Mrs. TBF had a stomach virus for a couple of days, but...

... at least we accomplished something!

Email ThisBlogThis!Share to TwitterShare to FacebookShare to Pinterest
Labels: puzzle

With all the sickness in the apartment over this past week, I almost forgot that this past weekend marked the 5-year anniversary of us moving into our apartment.

I'm tellin' ya, I never thought we'd live in this apartment for five years. In fact, when we moved in, we signed a two-year lease and I had doubts about making it through two years.

I guess I was wrong about that one.

Will we make it to six? Maybe... but let me qualify that.

If we're still here next January, we'll definitely be on our way out. We've decided, and Mrs. TBF has already told her bosses at work that this will be our last year in Switzerland. One way or another - either moving back with the company, or giving notice and moving back at our own expense - we'll be moving back to the U.S. in the not-too-distant future.

Email ThisBlogThis!Share to TwitterShare to FacebookShare to Pinterest
Labels: The Final Countdown, time to go home

Mrs. TBF went back to the office this morning which means she's all better now. I'm definitely happy that she's 100% healthy again, but I did enjoy having her home for a couple of weekdays. 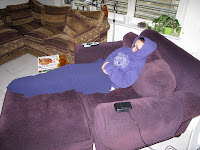 Everything was going along smoothly. Then, last weekend, I uttered those dreaded words:

"You know what? I may be jinxing us here, but... this is the first year in as long as I can remember that I haven't had a cold or the flu by this time of the year!"

You guessed it. I woke up last Monday with the sniffles. It wasn't too bad: just a really runny nose that has lasted about a week. I haven't even had that bad of a cough, and no sore throat at all. In fact, I can't even claim it as a proper man-cold!

Now that I'm getting over my cold, Mrs. TBF has come down with some horrific stomach ailment. Last night, she had to get up every couple of hours to visit the "library".

I sure was at about 1 p.m. just after I had finished working out. Seeing how I was completely out of cash and all, I walked over to a bank machine not too far from my gym so that I could fill up the money clip. It just so happened, the machine was right next to THE Burger King.

Since I normally try to watch what I eat during the week, I figured it was best to skip the fries and I only went for a Whopper. No fries, no drink, no cheese, no bacon. Nope... just a Whopper.

I'll tell ya, it's a good thing I had just stopped at the cash machine because...

Last month, while in Chicago, I seem to recall seeing promotions for 2 Whoppers for $4!

It's unbelievable to me that a Whopper costs nearly four times as much in Basel as it does in Chicago. What's the minimum wage here right now? Actually, what is it in America these days? $8/hour???

Come on!! They're unskilled workers for chrissake! OK, they can speak multiple languages, but I'm sure their English is pretty much limited to "Would you like cheese or bacon?" or "Would you like ketchup or mayonnaise?" ... for which they charge extra, by the way. That's right, they charge you for each individual packet of ketchup or mayo... something like 30 cents per pack!! My friend, Dr. Andy, always orders something like four packets of ketchup with his fries. I wonder if he realizes that he's paying over a buck for ketchup.

And... as if it couldn't get any worse, my Whopper wasn't even hot - even though it was made to order. It was barely lukewarm!

She Brings Home The Bacon...

TBF: I need to go to the cash machine. I have absolutely ZERO cash on me.

Mrs. TBF: Do you need some cash? I have cash.

Email ThisBlogThis!Share to TwitterShare to FacebookShare to Pinterest
Labels: bringing home the bacon, out of cash

I've been hibernating since we returned from Chicago. I really don't have any reasons for the lack of posts other than that I just haven't felt like blogging.

Have I been busy with other things? Nope!

Have I been sick? Nope!

Quite honestly, I still don't really fell like it, so let's just link up to some photos from our Christmas in the Windy City.

Maybe I'll have more to say in the next few days.