My job as Hausmann, as I see it, is to take care of EVERYTHING so that all Mrs. TBF has to do is work...and relax. Unfortunately, the two often have to mix. But, I guess that's why she gets paid the big bucks.

Especially lately, Mrs. TBF has been working her ass off because of a big "deal-that-I'm-not-at-liberty-to-discuss" that was going down. During Easter weekend, she pretty much had ZERO days off. Sure, she was working from home, and it's not like she was working on "the deal" every minute of the day - I'll give you that. However, it did occupy her thoughts for pretty much every waking minute, and she did spend A LOT of time with the laptop and on the phone with lawyers, colleagues, etc. AND...King didn't help matters any because he felt it necessary to carry his toys around, howling, whenever Mrs. TBF was on the phone doing "bidness". That made it necessary for Mrs. TBF's conference calls to take place in the relative quiet of our home office - with the door closed.

Picture the scene: It's an hour before guests arrive for Easter dinner, the leg of lamb is ready to go in the oven, Mrs. TBF is holed-up in the home office on a conference call, TBF is vacuuming (illegally on a Sunday), and King is howling while carrying his little toys around the apartment.

Why didn't Norman Rockwell paint that one?

So, when we booked our hotel and non-refundable TGV tickets, the "deal-that-I'm-not-at-liberty-to-discuss" didn't exist yet. Seeing how we've become pros at juggling our supposed free-time and Mrs. TBF's work responsibilities, we figured that going to Paris would be no problem at all. And, it wasn't...

Mrs. TBF handled several calls during the ride from Basel to Paris (even though we found out when we were leaving the train in Paris that she was supposed to go in to the vestibule to use her mobile phone...OOPS!), and then I added a few pictures to my vast collection of Mrs. TBF conducting "bidness" in various cities around the world. Here's a sampling: 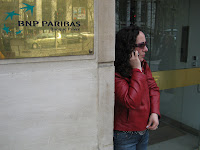 Mrs. TBF takes a call while walking down the Champs E'lysées. 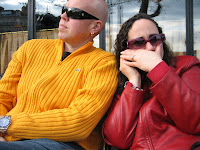 Conducting more "bidness" while enjoying a couple of drinks. She was "gettin' LOUD!" during this call, so I made her cover her mouth. It...didn't help. 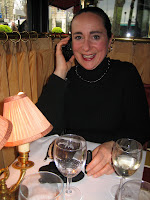 The moment, at lunch on Saturday, when Mrs. TBF found out that an agreement had been reached, and "the deal" was about to be signed. Just look at that happy face.

OMG you just freely admitted to vacuuming on a Sunday and no one has punished you for it yet?????

So does Mrs. TBF have to speak in code so she doesn't tip people off who might overhear her?

Thanks to TBF for putting up with all the time I have to do "bidness" on weekends, evenings and vacations!

Kirk - Yes I do speak in code. All deals have code names, some of which are very funny.

Jul - I do sometimes vacuum on Sunday. However, I always carry the vacuum cleaner instead of letting it roll on the floor. That way, if anybody complains, I can just say it was Mrs. TBF blow-drying her hair.

Kirk - Mrs. TBF beat me to the punch, but yes she does speak in code. They have code names for the various parties involved and her phone conversations sound ridiculous. So ridiculous, in fact, that I pretty much just ignore them altogether.

By the way, I love the color of your sweater.. But it's killing me to know, why don't they sell that style of sweater for men in North America? Maybe I just miss it or something?