The trip to London was quick...but good. I guess if I had to rate the trip, I'd put it in the "not-quite-as-planned" category. Nothing bad happened, it's just that I ended up not going to Madame Tussauds as planned - and that was one of the things I had really set out to do. 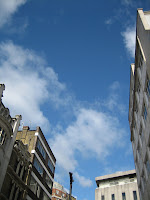 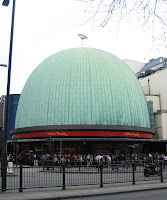 Everything started out OK for my day on my own. I walked out of the hotel into the unexpected sunshine, enjoyed the leisurely 25 minute stroll to Madame Tussauds, and then was confronted with THIS upon arriving. I'm not joking, there had to be 300 people in line waiting to get in. Not being one who enjoys waiting in line, I decided to just wander off...aimlessly. The weather began to change, so I ended up killing some time (while it rained) inside a Selfridges. After browsing for about and hour or so, I ended up at a pub that served up an excellent steak and kidney pie. After lunch, I just went back to the hotel and took a nap.

OK... so what else did we do? When Mrs. TBF wasn't working, we managed (as I said before) to squeeze in a little shopping, and we also met up (at a pub) with Julie of This non-American Life who just happened to be in London at the same time we were. Finally, we also enjoyed a couple of really nice dinners.

The first night, we ate at Marcus Wareing At The Berkeley which we really enjoyed and would recommend. Then, the next night, we ate at Nobu Berkeley Street which had really good food, but we wouldn't recommend. OK...maybe we're getting old, but... we don't like eating in a place where the music is so loud that you have to yell to each other while you're eating dinner. That's for bars, not for restaurants. Also, we showed up on time for our reservation, but our table wasn't ready and they kept us waiting. Sure, it was only for ten minutes, but...

We're not only old, but we've become Swiss.

Old AND Swiss??? That's scary! I wonder if you'll ever be able to adapt to the US again.

Get out now! While you still have a chance at recovery!

Well, not from being old. The ship has sailed on that one. But at least from being Swiss.

I haven't ever commented on your blog I don't think, but I read it often and just crack up.

Especially when I am having a bad day or can't sleep! thanks for sharing your fun retired life on here!

Just for the record, you didn't seem any older or Swisser than usual. You hide it well.