Just a few words about our hotel in Copenhagen - 71Nyhavn.

First of all, I misread my confirmation when I booked the hotel on their website. I read CHF600/USD 582 per night, and that turned out to be the cost for our entire stay - two nights. So, while still expensive for what it was, the hotel ended up costing half the price I had originally thought it would cost. So, that was good news.

The hotel is decent, but it's not fancy by any means. I guess the best thing about it is that it's in a great location right in Nyhavn. However, if you ever plan on staying at this hotel, I have one big tip: REQUEST A ROOM IN THE NEWER PART OF THE HOTEL!!! 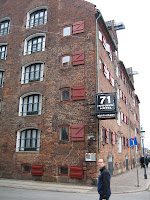 The old part (pictured here), is the part that faces the canal. While the view is much better, the rooms absolutely suck. They are small, and the bathrooms are tiny. In fact, the shower is just a shower head coming out of the corner with a shower curtain that hangs from the ceiling. The shower floor is pretty much the bathroom floor with a drain. If I had had to shower in there, I would have been standing there with a shower curtain stuck to my body with water pouring down on my head. Not good!

Mrs. TBF took one look at the room, said "NO WAY!", and then went down to the front desk to POLITELY voice her complaints. We ended up being switched to a room in the newer wing. Although it had a view of the street instead of the canal, the room was much better. Also, the bathroom was a real bathroom with a bathtub shower combo.

What I find interesting is that the man at the front desk told Mrs. TBF that a lot of people complain about the old wing, however "....we are not allowed to make any changes because the building is protected," which I take to mean that it has protected landmark status. 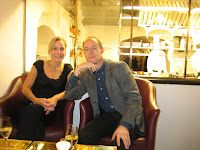 That would be fine except for the fact that the restaurant we ate at on Saturday night is in the oldest building in Copenhagen, which I'm assuming must also be protected, AND... THEY HAVE A GLEAMING, MODERN KITCHEN.

I believe Mrs TBF used her pals favorite phrase "This is an outrage..." but with a smile.... and got a nice room. It pays to think that the room is twice as expensive as it is....;) Tusind Tak.