The Russians are coming! THE RUSSIANS ARE COMING!!!!

We first came to Amalfi three years ago: no Russians.

Two years ago, we came to Amalfi for the second time: a couple of Russians.

This year: our hotel is crawling with Russians.

We chose a couple of seaside chaise lounges our first day here, and we were surrounded by people speaking Russian.

They mostly sit under umbrellas, playing cards, taking calls and sending texts on their crack-berries, and ordering the occasional fruity, frozen cocktail. Then, they all get up together and go for a communal swim in the sea.

Overall, in my opinion, a very odd people. 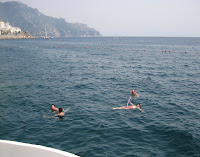 Yuri: And now, comrades, we go for communal swim.

Ludmila: Oh, Yuri! You are like Russian sturgeon jumping out of Caspian Sea!

Ludmila: Damn you, Yuri! You, once again, confuse Armani hat for bathing cap!

Ludmila: If you buy hats for yourself, what you buy for Ludmila?

Yuri: Oh, my little chinchilla... Perhaps I buy Santa Caterina hotel, and rename it Святой Катрин...just for you! 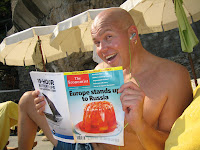 Ludmila: Who is awful man who reading English propaganda about Russia's rightful invasion of Georgia.

Yuri: I think he called Big Finn. Perhaps I call my friend Vladimir Putin and arrange to also have "peace keepers" sent to Finland!

It's good to know that you're also causing a kerkuffle in Amalfi! Way to go!!!!

Check out my blog....I finally found something to blog about!

OMG-- That last pic with you and the JELL-O mold is CLASSIC!!

Are you and Mrs. TBF interested in coming to visit Paris at the end of Oct? I'm organizing a trip to Euro Disney (dress up for Halloween) on Halloween Day.. Don't know if that floats your guys boats but if it does, let me know.. Take care, Leesa