That song kills me, I think I'll download it.

It's been four years, people! That's right. We moved into this apartment four years ago today. It seems like just yesterday that I was looking at our lease agreement and asking Mrs. TBF:

This is a two-year lease. Are you ABSOLUTELY SURE that we're going to live in Switzerland for at least two more years?!?!?!?!

We signed the lease, and FOUR YEARS LATER we're still here. Hmmmm... How did she know?

The people in our building must be thinking that we're due to move because a couple who lives two floors below us saw me walking out of the building last week as they were walking in and told me:

Please let us know in advance when you're going to move because we would like your apartment.

I told them that it wouldn't happen for at least another year, but that I'd let them know as soon as I knew. Our apartment has always been rented to expats who have never lived here for more than five or six years, so I guess the neighbors think it's only a matter of time before we're gone. 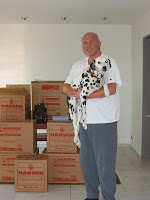 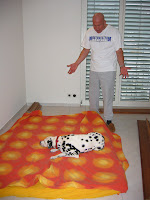 I wrote about our move, and posted some pictures, two years ago. But here are a couple of new photos, never before seen on this blog, from that cold time in January, 2005. We had a lot of boxes to unpack, but Dominique absolutely refused to help. King was in hiding because he didn't want to help either. And judging by my size, Mrs. TBF was probably in the kitchen cooking the copious amounts of food I required back then.

It's hard to believe that this May we'll have lived in this apartment for longer than we lived in our first apartment in Reinach.

Wow 4 years, I guess I've been in Canada just a bit over that time also... Sort of crazy to think back that long ago... I think you've got a sweet pad by the way... Who would want to give it up with a roof top deck like yours!

Man! How time flies. Although I'm aware of how long we've been in Reinach, it doesn't seem like you've been gone so long. Strange, huh?

Though your comments about the neighbors has me wondering about the couple downstairs that seem intent on smoking us out of our apartment with their cigarette smoking on their balcony every day.

Greg - Do you live one floor below us by any chance? The people who asked me about the apartment live two floors below us, go out on their balcony a zillion times per day, smoke like chimneys, and the smoke billows into our apartment. Maybe it's exactly as planned.

Nope, we're now on the other side of Thalwil from the Global Librarian. And we're on the top floor. I keep trying to come up with ways to annoy the people below us, but not annoy the folks below them, who are very cool. So, birdfeeders are out, but a spray bottle of fish sauce might work...

Four years! Wow! This is just the opposite of my situation, We were suppose to be in Germany for that long, but the company is moving us to a different country after only a year.

Diane - Four years in this apartment, and 4.25 years in the previous one a few miles away. We're approaching 8.5 years!

You said you'd come back when Bush left office. It's time.

TSK - And you said you'd all come for a visit. It's time.

The only way we can afford to visit is if you treat. ; )