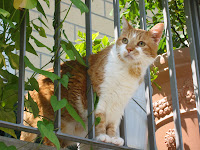 King passed away quietly this morning. He was part of our household for 18 years, 2 months, and 23 days. We will, and already do, miss him greatly.

It was on a sunny afternoon on November 10, 1990 that we walked into the "cat room" of a local animal shelter in Palatine, Illinois. I saw a ray of sun beaming in through the window directly onto a sleeping King, and I said: "THAT'S my cat!"

We adopted another cat (Binky) along with King that day, but I'll always consider King to be our first pet because I decided at first glance that we'd take him home that day. I walked over to him, gave a gentle stroke on the head, he opened his eyes, meowed at me, and went back to sleep. SOLD!

In retrospect, I think he may have actually chosen us.

We added yet another cat (Zane) and a dog (Dominique) the year after adopting King and Binky. So, at one point, we had a house full of pets. Binky was the first to go to the great scratching post in the sky. Then, Zane followed in 2000 shortly before our move to Switzerland. Nearly four years ago, Dominique "ripped out our hearts" when we had to put her to sleep after her battle with chronic kidney failure.

It was also chronic kidney failure that would eventually cause King's demise.

A blood test from a couple of years ago confirmed that he was in the early stages of renal failure. We began noticing him drinking, and using the litter box, a lot. One of the many things to King's credit was that he ALWAYS used the litter box (at least when he wasn't in the rooftop garden). A couple of months ago, I began noticing blood in his urine. Last week, for the first time ever, he had an accident on the duvet on our bed. The vet decided to try antibiotics just in case it was just a bladder infection.

This past Friday night, we came home and found a puddle of bloody urine in the bathroom right where King often slept on the heated tiles.

We knew it was time.

I brought King to Dr. "Boozer's" office this morning for the last time. I gently stroked his head - just like I did for the first time 6,659 days ago - King closed his eyes and...went to sleep.

It's hard to believe that Mrs. TBF and I are now empty-nesters. It's just the two of us in the house for the first time since late-1990. A new chapter has begun.

Email ThisBlogThis!Share to TwitterShare to FacebookShare to Pinterest
Labels: Dr. "Boozer", empty-nesters, feline chronic renal failure, King outlived them all, the joy and agony of having pets

OMG! I'm so sorry to hear that! I know you expected it would be his time soon, and although it may not be of much comfort now, King had a long and very happy cat life. I'll sure miss that big cuddly cat.

PS: I hate to admit it, but I don't see Dale making it all that long, either, so I feel your pain.

So sorry. I, too, have known the sadness of losing a pet.

Oh, I'm sorry. I have tears in my eyes. Will his commentary live on?

Oh, geez, I'm so sorry. Isn't it sad to lose animals friends we love, and who love us.

I came across your blog because I am visiting everyone who has listed bacon as an "interest". Who knew there were so many of us in the world.

So sorry to hear it Timi and Jo Ann. We know the pain of losing a long-time beloved pet/pal. King marked an Era. I think we will still hear King meowing to be louder in the hall way...I love that he kept going so well for so long...you took great care of him...

Hi, Finn. It's Pyzahn again. I wanted to give you a link to a post about a special friend in my life.

TBF and MRS. TBF....We are very very sorry to hear of Kings passing. I have those pics of the Pip and King in your house etched in my mind where King allowed the Pip to inch her way onto the couch when she stayed with you all in Nov. Good old King, he will be remembered very fondly in our hearts! Take care ESP

I'm so sorry, I also have tears in my eyes.
I've always loved reading the King stories on your blog.

Oh King! I was convinced he was going to live forever.

How sad. I am so sorry for your loss.

Mr. & Mrs. TBF, I am so sorry to hear about King. It's always difficult saying goodbye to the ones you love and even harder to say to the ones that can't say it back.

We are sorry to hear about King's passing. He was the one that finally got me to like cats! He will be missed.

RIP King - you were a good, good kitty.

So so sad for your loss. What a special cat with such a great personality.

Wow.... Very touching story.. It is hard to believe. I know it was the right thing for him too!

So sorry for your loss. And particularly poignant as you contemplate the end of an era.

So sorry to hear that he's gone. Although we never got to know him personally, we heard a lot of stories. He had a good life.

It`s an end of an era. I´m sorry. But he lived a long and happy life with you guys :)

awww, very sorry for your loss. I still remember the death of my cat in 1989, and know how it feels.

I just lost a cat two weeks ago and I loved your post about King... it made me tear up at work. I totally agree that your pets pick you. I bet King already had a new family member picked out for you.