The masses have spoken! Here are the most likely candidates (other than Alexander McQueen) for people roaming the planet who may be my separated-at-birth twin brother. 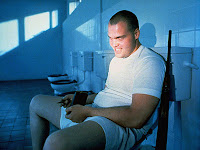 Vincent D'Onofrio as Private Pyle in Full Metal Jacket
Back in the mid-90s, I was actually once asked by a waitress in a restaurant if I was "the guy from Full Metal Jacket." I guess I can see the resemblance, but I'm guessing that Mrs. TBF should really be the judge since she's the one who sees me in this pose (minus the assault rifle) pretty much every morning. Sorry...long-time married couple thing! 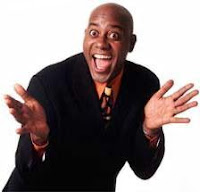 Ainsley Harriott - British celebrity chef
Ainsley Harriott is, or at least used to be (haven't seen him for a while), a pretty big star on the UK Food Network. Back in the late 90s, I worked with this American guy named John who had a British wife and had lived in the England for many years. One day, out of the blue, he said to me: "You know what? You remind me EXACTLY of this British TV chef named Ainsley Harriott. He's a dead ringer for you. He's big and he shaves his head. He's exactly like you. Ummmm....except he's black." 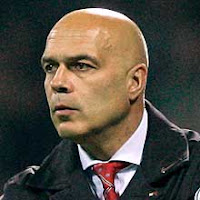 Christian Gross - coach of the FC Basel professional soccer team
What are the odds that I would resemble (down to the bulging vein I get in my temple when I drink wine) the head coach of Basel's soccer team? One time, several years back, we went out to dinner with some friends (Christian and Nimashini) of ours. It just so happened that FC Basel had won the Swiss League Championship - or whatever it's called (I'm not a big soccer fan) - earlier that day. Christian - who's taller than I am - and I walked into the restaurant, and suddenly we heard everyone start yelling "Christian Gross!!!" I figured that they were calling out to Christian because he was Christian AND gross.

TBF: Do you know those guys?
Christian: No.
TBF: Why are they yelling at you?
Christian: I...have no...idea.

I figured out about a year later that they were really yelling at me. I should have tried for some free drinks. Opportunity lost!

Mr. Clean. I've been called Maestro Lindo in Italy, Meister Proper in Germany, and Monsieur Propre in France. Oddly enough, nobody has ever called me Mr. Clean in America. Maybe it'll happen when I get older and my eyebrows turn white.

Are there any others out there?

Funny you should post this. Just the other night I was watching Swiss TV and they showed Christian Gross. I thought to myself: "Is that TBF?".

I knew Meister Proper would have to be on the list.

You no longer look like the crazy guy from FMJ since having lost the weight.

(We used to think you resembled Bernie Mac too.)

Wouldn't all blogs be better with bacon?