The Things We Do For Love...

"Hey, Hon...don't forget that I ordered some cookbooks and had them sent to your sister's house," Mrs. TBF said to me shortly before I left for Chicago. "No problem," I told her, since I knew I was bringing way more luggage to Chicago than I needed.

Upon arriving at Jo's house, I went to "my" room and noticed a stack of Gourmet magazines. At that moment, I recalled that Mrs. TBF had mentioned that she had subscribed to Gourmet and had them sent to Jo's house. Once again - no problem. I just threw the magazines on top of the cookbooks that were sitting in the suitcase in the corner of "my" bedroom.

Later during week, I exchanged a book that my parents had brought Mrs. TBF (that she had, unfortunately, already read) for another...you guessed it...cookbook. I brought it back to Jo's house and threw it into the suitcase. No problem!

The day finally came when it was time to go back home, and...PROBLEM!!! When I went to throw the suitcase on the bed, I discovered that what was basically an empty suitcase when I flew to Chicago had now suddenly turned into a "bag of bricks"! Fortunately, I had two bags, and I did some creative packing in order to redistribute the weight. Both bags ended up being pretty heavy, but they both (barely) made it under the weight limit.

I lugged these "bags of cement" to the car and drove to the car rental office to turn in my car. My sister met me at the rental car office, and I grunted as I transferred the bags from my rental car to my sister's minivan. Then, I grunted as I carried the bags from my sister's minivan into her house, and again (later) from inside her house out to the limo. "Señor...what do you have een deez bags," the driver asked as he struggled to load the bags into the trunk of the car. "My wife's cookbooks and cooking magazines...," I said as I collapsed into the back of the limo.

At the airport, I watched as the driver struggled to put the bags onto the cart. I was going to help him, but I figured that I needed to conserve my strength in order to be able to lift them onto the conveyor belt at check-in - which I did while "holding in my hernia." HA! Now they were the baggage handlers' problem! 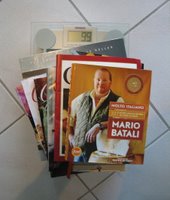 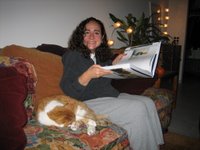 The bags, by means of a Herculean effort on my part, were now in our apartment. After unpacking everything, I decided to see how much Mrs. TBF's books/magazines weighed. And, as you can see, they came in at a whopping 9.9 kilos/22 lbs. Well...I guess they were kind of heavy, but...they weren't really that heavy. Plus, look at how much she's enjoying her new cookbooks (King lay there like a slug...it was his only defense).

Awwwww!
I am surprised they did not gig you on the luggage allowance...
your cat is a beast.

Knowing Mrs. TBF's great cooking skills and additionally, new recipies to try out, I'm sure you'll be rewarded for the "weight lifting".

Definitely worth it! Look at that big smile. You know what they say - "happy wife, happy life" :-)

Think of it as a preventative workout. You can bank exercise hours to put up against all the goodies Mrs TBF will be cooking for you.

hehehe.. sometimes the shipping charge to europe is just worth it. I lugged back several boxes of grill accessories this spring and that was before they lowered the weight limit. But it was worth it for the delicious food this summer and the big smile on M.'s face.

Yes I'd say it's worth it. And there's pics in those there cookbooks.. Doesn't the smile say it all anyhow...

I keep seeing king and Well he and our little spunk look too much alike...

When we came back from NYC yesterday my bag weighed in at 49.5 pounds.