A couple of weeks ago, while we were in Chicago, Mrs. TBF had her eyes examined by my cousin Greg.

...OF COURSE he's an eye doctor, ya goof! You don't think I'd just have some random cousin poking around Mrs. TBF's eyes, do you?

Dr./Cousin Greg's conclusion was that Mrs. TBF's eyes are remarkably stable, and he wrote out a lens prescription that she could take back with her to Switzerland.

Why not buy them in the U.S., you ask? That would be because Mrs. TBF decided that she wanted some "Swissy" eyeglasses!

We went together to pick them out last Saturday at Ramstein Optik. Along with wanting my valued opinion, Mrs. TBF was also hoping that I could act as German translator. However, it soon became very apparent that I had absolutely no clue how to say any vision/eyeglass-related word in German other than Brillen (eyeglasses). The employee came back with a tray of eyeglasses AND another employee who said: "Perhaps it will be easier if I help you so that you can speak English instead of German."

She brought out a bunch of different samples, and then asked us at one point if we were tourists. OUCH! At that point I had to ashamedly admit that we had lived in Basel for seven years, and that I CAN actually speak some German, but just...

Oh...who am I kidding? My German sucks! 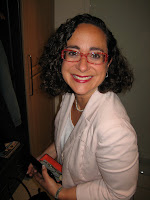 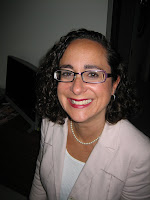 Zip ahead to yesterday morning. A man from Ramstein Optik called, began immediately speaking to me in English (Scheisse!), and told me that Mrs. TBF's glasses were ready. She picked them up on the way home from work, and this is her modeling her new red and purple glasses right after she walked in the door. I think they look great.

Overall, other than the fact that the glasses were kind of expensive, nothing but good things can be said about Ramstein Optik. They totally rock.

But not as hard as the band, Rammstein (no relation)!

The glasses look great on you, Mrs. TBF! And if you ask me, it's worth every $$ if you like wearing them.

PS: TBF: I'm sure the Mrs. can also be naugthy without glasses ;)

They look similar to the ones CS was wearing in a photo on your blog at some point.

So now she looks very European!

Good catch TMS - I was modeling myself after CS when choosing frames!

I need new glasses too but cringe at the thought of spending all those €€€€.

I love the new classes too! I bet it's sort of exciting to have an added new look.

P just got a new pair. He acts slightly different too..

It's almost like a new hair cut but not... lol