What else is new?

I made it back to Basel (no delays for a change) yesterday morning, and Mrs. TBF left for Singapore this afternoon. She'll be back on Friday.

Chicago was good. Here are some highlights:

Personal business was taken care of! Nothing bad...nothing major. It's just sooooo boring that I won't even get into it.

Classic Jo Mama Moment - I: I bought a "Blades Of Glory" DVD at Best Buy for Mrs. TBF (she LOVES that movie!). I brought it back to Jo Mama's house and put it on her coffee table so that she could watch it. At one point, while I was in my bedroom, she apparently picked it up, noticed the "Made In Mexico" sticker on it, and blurted out to herself: "Made in Mexico? Can't WE make anything anymore?!?!?!"

Classic Jo Mama Moment - II: Jo Mama told me (while we were eating dinner at California Pizza Kitchen) that she thinks the U.S. government should make sure that every single person in the U.S. has health insurance.

TBF: "Of course, you then agree that our taxes should be raised and your Social Security benefits should be cut immediately in order to fund this 'universal' health insurance. Right?"

TBF: "You mean, the 'free' health system that is funded by 50+% income taxes and non-medical benefits that are lower than those in the U.S.?" 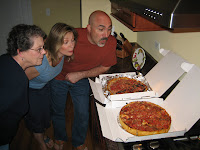 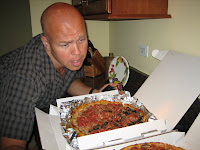 Chicago deep-pizza!! I took Jo Mama out for dinner on Friday night. I wanted to go to Gino's East for some Chicago pizza, but Jo Mama wanted to go to California Pizza Kitchen because they "...make the BEST chopped salad!" The salad ended up being "wilted", and the pizza sucked! Fortunately, the bro- and sis-in-law came to the rescue the next evening by ordering some Lou Malnati's deep-dish. It...was...AWESOME!

NOTE TO SELF: Don't stuff yourself with garlicky deep-dish pizza the night before an overseas flight!

Hassled by a crazy dude at O'Hare Airport: I arrived at O'Hare a good 3.5 hours before my Chicago-London flight because I wanted to buy some Japan Rail passes - for our upcoming trip - at the Japan Air Lines counter. I showed up at the counter, and...there was nobody there. After going to the information desk to find out what the deal was, I came to find out that the JAL counter is only open for a couple of hours in the morning. NOTE TO THE JAPAN RAIL WEBSITE: How about putting the JAL counter hours on your website?

Anyway...I had A LOT of time to kill, so I parked myself at a bar so I could have a couple of Okocims and watch some football. I won't get into details, but I ended up being hassled by a little old homeless/crazy dude who didn't like that I glanced over at the luggage cart containing his worldly possessions that he had just bumped into my barstool. I just ignored him until he called me a "earring-wearing faggot". Nobody, I mean NOBODY, insults my earrings, so I just told the tough-looking Polish bartender that the crazy dude was hassling me, and SHE told him to "...get da hell outta here or I'll call security!"