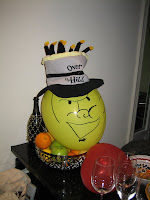 By turning 47 last weekend, I officially entered (as far as I'm concerned) my late forties. We celebrated with friends (Drs. John/Rammy/Andy/Di & kids) at Drs. John and Rammy's house.

Knowing my fierce opposition to wearing the "Over The Hill" hat - not because I object to being called "over the hill," but rather because it's really hot and makes me sweat profusely - the gang opted to place the hat on top of a large yellow balloon on which they had drawn my likeness. I've now discovered that my friends think I possess the nose of a pig.

Happy Birthday! Didn't realize you were that yellow. ;)

Enjoy your laties. I quite like your attitude to aging. Way to go!