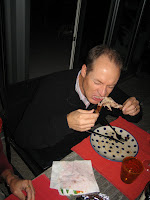 Dr. Andy, Dr. Di, and the kids came over for some grilled flesh (clearing assorted meats out of the freezer) this past Saturday evening. They come over fairly often, so no big deal... right? What made this evening different was that Dr. Andy returned from a business trip and came directly from the train station to our apartment where he met the rest of his family.

Well... then how about these facts? Dr. Andy had in the past week flown to South Africa, the plane had to make a quasi-not-quite-an-emergency landing in Rome due to a door that didn't seal up properly, had to return (flying "...at low altitude, but high enough to get over the Alps") to Zürich where he spent the night, flew out to South Africa the next day, then flew to South America a couple of days later, spent a few days in South America (where he might have taken another flight...not sure), had a three hour delay in Sao Paulo which resulted in him being switched to a flight to FRANKFURT, and then had to take a three hour train ride from Frankfurt to Basel.

Who says business travel is glamorous? 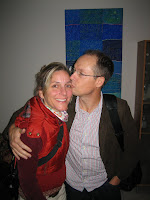 Even after this debacle, Dr. Andy still seemed none the worse for wear, and he and Dr. Di ("Yes, I'm wearing a down vest in August! What about it?") managed to stay at our place until 1:30 a.m.! 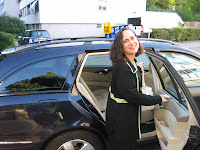 Yesterday morning, it was Mrs. TBF's turn to jump into a taxi and become a "junior" road warrior. I say "junior" because her flight to Munich was delayed by only one hour, and it was spared the need for any quasi-not-quite-an-emergency landings. However, she gets full road warrior credit for staying at some dinky hotel in Holzkirchen (about 30 minutes outside of Munich) in a room with a toilet that trickled all night, and construction that began right across the street at 6 a.m.!

Hi Tim. Waddymean travel is not glamorous! I am sending this comment from Myanmar. The flight from Bangkok was supposed to take me to Bangalore, but due to the fact they again forgot to seal the door - we had a night in one of the most reclusive regimes in the world.

Come to think of it - it was better than the emergency stop in Rome, because the toilet on the plane didn't explode (which you didn't mention in the 'detour to Rome' blog)...

Sure could use a tini when I get back. Know where I can get one?