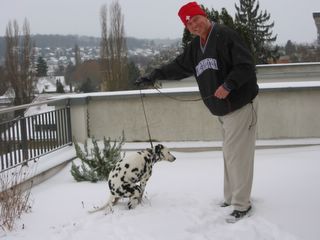 Here's Dominique pooping on her rooftop "litter box" on February 27, 2005.

One of the best features of our new apartment is that the entire rooftop is ours, and ours only. Most of the rooftop is tiled and landscaped, but a fairly large portion of it is planted in a natural, prairie-style planting. The previous owners mentioned to me that it was just a "...bunch of weeds", so I figured that I would eventually just landscape it myself at some point. One thing I didn't really consider was this area's potential as a lazy way of taking Dominique out for her rather frequent need to relieve herself (afterall, she is almost fourteen years old). We were taking her down in the elevator, down the front steps, and over to a grassy knoll about thirty meters away from the front door of our building. Most of the time, Dominique wouldn't make it to the grassy knoll, and she would end up doing her business on the rather ornately grooved tiles in front of our building. This would result in me either getting out surgical tools to remove her dookie from the grooves....or just leave it and pretend it was somebody else's dog. I think you can figure out which option I chose.
Then one day, our neighbor Suzanne asked why we didn't just bring her up to the roof to do her business. It was like being hit on the head with Duh!-hammer. Since those brilliant words came out of Suzanne's mouth, I'd have to estimate that 90% of Dominique's peepeeing and poopooing has taken place in the rooftop "nature preserve." And be not concerned, because I pick up after our baby every time she drops one of her little land mines. I just grab a bunch of poo-bags from the Robidog bin when I walk by one, and I keep them in good supply next to the door that leads out to the roof.
I have to admit that it's so convenient that this past Friday night I actually took a pee up there myself while I was waiting for Dominique to finish. I'd be willing to bet that Suzanne is now regretting having given me the idea!
Posted by The Big Finn at 2/28/2005 09:48:00 AM