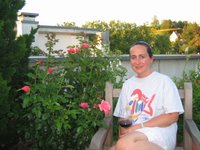 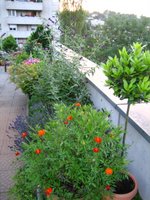 ...I cheated on Non-Photography Day by taking a few photos. I mean, it's not as if I'm going to get into some kind of trouble...right?
I thought it was a pretty dumb idea to begin with, and my first inclination was that I would take a zillion pictures of myself doing incredibly mundane things, and then post them on my blog every hour or so. After taking pictures of me cleaning King's litter box, washing the toilets, emptying the dishwasher, etc., I decided that that was also a pretty dumb idea.
Instead, the camera came out "naturally" as Mrs. TBF, King, and I sat in the rooftop garden enjoying the beautiful weather. I figured that I've spent many moments "appreciating the essence" of the garden, but I rarely take any pictures of it. So, I decided that Non-Photography Day was as good a day as any to take a couple of pictures of the garden. Dont' worry, I'm not going to bore you with a bunch of pictures of our plants. If you like, you can come over to our apartment and watch the snoozefests that are the videotapes of our vegetable garden from Elhmhurst, Illinois circa 1988. Instead, I think I'll make an effort take more pictures "up there" during the remainder of the summer while BBQing, enjoying it with friends, etc.
The first picture is of Mrs. TBF next to "her" rosebush (yet another crane finds its way into one of my photos!). It's Mrs. TBF's rosebush because I was going to rip it out, and she talked me out of it. The rosebush was scraggly and diseased, and it was in such an awful spot in the garden that I just figured I'd pull it out and plant something else in its place. Instead, I moved a few chairs around, gave the rose a little TLC, and voila! It's now a thriving part of the garden, and Mrs. TBF gets the seat of honor.
The second picture is just a random shot of one of the flower beds. It's kind of hard to see because I took it in the direction of the setting sun without a flash, but the bed currently has a lot of flowering lavender, a butterfly bush, and some foxgloves that self-seeded.
Oh my god...I'm a gardening geek! Who knew?
Posted by The Big Finn at 7/18/2006 11:30:00 AM

you ask who knew? I knew. You have always been interested in that stuff. I think it is the inner farmer in you.

looks great to me. I guess that could happen when you are the housetaker and do all of the stuff concerning the house...

I'm not good with plants. But I really haven't owned too many of my own yet. lol

No need to watch the snoozefest video from many years ago. You seemed to have recreated in this post quite well...zzzzzzz

Hmmm. Sounds like we may have to drop in spontaneously to see the thriving garden :)

ET - Taking care of "all things house" is my job. It's a labor of love...except for emptying the dishwasher - I hate that!

TSK - ...and you're reading it...AND choosing to comment on it. Busy day? zzzzzzzzzzzzz!

CS - We like surprises. Um...just make sure you call first.