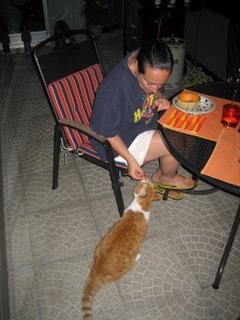 After over 15.5 years of loyal service on King's staff (Dogs have owners, but cats have a staff!), we found out last night that he LOVES melon. For some reason, King started begging next to Mrs. TBF as she was eating half a melon, and she decided to let him try it. He snarfed it up in no time. So she gave him more...and more...and more. He couldn't get enough of it. We decided to stop giving it to him, and he just started licking the tile so as to lap up any remaining melon juice.
In a show of appreciation, he decided to torment us all night by running around the house "talking" to us. This morning, at some ungodly hour, he charged into our bedroom, jumped on the bed, and began "howling" at us. What a FREAK!
We thought the sudden melon-love was a fluke, so we decided to see if he'd eat more this morning as we ate the other half for breakfast. He chowed down the melon, chowed down his regular cat food, and then begged for more.
He's over eighteen years old.
BEAST!
Posted by The Big Finn at 7/14/2006 08:45:00 AM

Maybe King was howling because all that melon was doing a number on his digestive tract...

Melon?? Hmm. Why not. But from his late night activities, I assume however, that King probably also had a vitamine overdose. Or was he trying to get you to give him more?

Cats anything when they want to. King said to himself: "They don't think I'll eat melon, I give them eat melon!"
Cats never fail to amaze me.

My cat LOVES melon. I thought it was a fluke too but he always begs for it. I do, however, try not to give a lot as my cat has irritable bowl syndrome and that sends him over the edge. The cat box bangs after he eats it...if you know what I mean?

Kirk & CS - King always howls at night. We had a friend sleep over last week, and I think it kind of freaked her out.

haha - now that is funny. I can't believe he howls. I guess I'll be back seeing the cat soon too.

My poor dearly departed Couz had a thing for expensive fresh fish. Throw him some cod? I don't think so. Smoked salmon? No way. Some random catch of the day that cost 50 dollars a pound? Lightly poached please.

Funny! And a much better cat snack than butter, which my German cat couldn't get enough of... I accidently left a pacakge out on the counter for about 5 minutes once, and came back in the room to find she'd eaten almost the whole thing.

I will conclude by noting that a cat becomes much less lovable after it has spent the afternoon vomiting lakes of melted butter all over one's apartment.

Our dog Zoe eats just about anything she can. However, one time, she went over the edge. She used to enjoy going into the bathroom after our 2 young boys would leave. Naturally being boys, they never flushed. I mean, never. We began calling this her morning Crappucino.

Ewwww... Medium Swede - teach your boys how to flush! It is not hard and almost fun...

Hee hee - staff! That is so true. Cats definitely are there to be served. Our cats were always into something. My mom baked a cake one day and had left it on the counter, frosted. She came back a half hour later and all the frosting was licked off. Blech!