Got a problem here people!

Part of The Fishbowl was planted in what I would call a "prairie-style" planting. It's the area of The Fishbowl that is only partially viewable by our Swiss neighbors, so it's where I go for a pee when I'm up there and don't feel like haulin' my Big Finn butt downstairs (...my God...did I just write that on my blog for all the world to see?). Now, I have nothing against native plantings - I actually like them. However, one thing that's essential when you have a prairie-style planting is that you actually maintain it so that it doesn't become a tangled mess of overgrown weeds. This is a rental property - it wasn't maintained by the previous residents...let's just leave it at that. 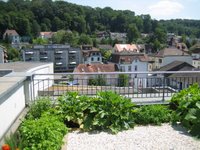 I gave weedplatz a chance last summer, and decided that it just wasn't cutting it. So, this past spring I decided to take a portion of this area and turn it into a little herb/vegetable garden. I bought landscape fabric to keep the weeds down, a few timbers for edging, and a shite-load of heavy-ass bags of stones and garden soil. All this stuff was transferred from the Jeep, through two sets of doors, into the elevator, and up the half-spiral staircase that leads to The Fishbowl...DAMN, that was hard work! And, in case you're wondering - NO, I didn't ask permission from the landlord. If I've found out one thing in my nearly forty-four years of learning, it's that it's much easier to ask for forgiveness than it is to ask for permission. I'll worry about the landlord someday when we move. If you ask me, my efforts resulted in a decent little garden. We have a bunch of herbs, some Swiss chard, and some zucchini and squash. 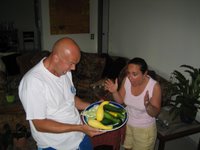 Therein lies the problem. Not the herbs - they've been very useful for pesto and salads. Not the Swiss chard - a very underrated vegetable, if you ask me, that we've been adding to salads and eating steamed. The PROBLEM is with the zucchini and patty-pan squash that I planted. I planted two hills of each...and we've been eating it for every meal since what feels like the beginning of time! Seriously, we've had zucchini or squash (or both) for the last week or so...AND THIS IS WHAT WE HAVE IN THE FRIDGE!!! Plus, there are more of these little buggers forming as we speak. They're relentless!
My God...it's 7:50 p.m....I need to go make some dinner...with zucchini, of course...
Maybe I should have asked the landlord for permission. I'm 99.9% certain he would have said no, and we wouldn't be having this problem now, would we?
So much for nearly 44 years of learning.
Posted by The Big Finn at 7/25/2006 01:50:00 PM

haha - I love that last pic! Well you could always give a few of those veggies away to friends, or bbq them, they are so tasty that way!

For all those who come for an impromptu fishbowl Friday...guess what you're taking home with you!

Yes Squash are prolific aren't they? When I was growing up we always had a garden - a big garden! I miss that : -(

MMmmmm fresh squash and zucchini...you should put a sign out for those neighbours to read, "Squash, 1 (swiss weight measurement), xx Francs" perhaps you could make some use of your fishbowlness...

Mmm...shrimp balls. We had neighbours who used to slap a FREE ZUCCHINI! label on a box and put all the extra zukes out on the sidewalk for people to take with them.