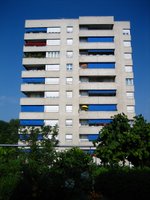 The Fishbowl is my name for our rooftop garden. Why? Because this tall building, with its nine floors worth of apartments at, or above, our rooftop garden level, is located directly across the Birsig River from our building. And let me tell you...we are being watched. I know it for a fact. Let me share...
One time I was walking to the tram, and a man (who I came to find out is named Bruno, and lives in the apartment on the lower right hand side of the picture just below the yellow umbrella) was out walking his dog. He stopped me, and spoke to me in German. The conversation went something like this:

Bruno: Excuse me...you're the person who lives in the building next to the river with the nice rooftop garden. Do you speak German.

Bruno: Oh...you do speak German. Good! I've heard you speaking English with your wife and friends. I mean...I just want to tell you that my wife and I...now, we're not spying on you [those were his exact words...but in German], mind you...just love what you've done with the garden. Plus, we love the fact that you use it so often to relax and entertain guests. The flowers, the plants, the garden furniture...fantastic!

TBF: (suddenly realizing that during the summer months I spend 90% percent of my time up there in a bathing suit without a shirt) Oh my god...I'm sorry...I just realized that I spend all my time up there mostly naked. You see, it's totally acceptible in North America to walk around your yard without a shirt...I didn't think anybody was...

Bruno: Oh...no problem...you're relaxing when you're up there...we're not spying on you, mind you! And, you do so much grilling...on both your balcony and your rooftop garden. The food smells great!

Bruno: You even grill in the middle of winter...amazing!

This conversation went on for a while. He shared some of his life story (retired to Crete, returned to Switzerland due to health problems, etc.), I shared some of mine, and then, quite frankly, my brain began to hurt from having to make small talk in German. Later that evening, I relayed the story to Mrs. TBF, and she found it all rather amusing.
I'm pretty sure it wasn't too much later...maybe even the next weekend (this all took place last summer), that Mrs. TBF and I were sitting up on the rooftop. We were both reading magazines when suddenly Mrs. TBF said to me (in that way of speaking where one mumbles while barely moving the lips): "There's a lady on the second from the top floor of the tall building waving at us." Sure enough, I looked up, and there WAS a lady standing on her balcony waving down at us. We both waved back, and then realized that we were like two fish in a fishbowl. Or, kind of like two little pets going about our lives to the amusement, and under the watchful eyes, of our Swiss neighbors. Thus, the name "The Fishbowl" was coined.
Unlike last year, the weather this summer in Basel has been FAN-TASTIC! It's been that sunny, barely a cloud in the sky, hot but not humid, breezy kind of weather. If every summer was like this, I'd say that we would probably live here the rest of our lives (it's amazing what sunny weather does for one's mood...). It would more than offset the dreary, drizzly, grey, drab weather that makes up most of the months from November through April that make wish to be anywhere but here (that's why we travel so much during those months!)! So, zip ahead to this past Friday.
We've decided to start hosting Impromptu Fishbowl Fridays. Meaning: we monitor the weather during the week, and if it looks like it's going to be nice on Friday night - we'll invite a few people over for a get-together. I'll light up the grill, everybody contributes to the food and drink, and our Swiss neighbors look down from their balconies to see what the crazy foreigners are doing (Dear Swiss: It's called...FUN! Try it sometimes!). 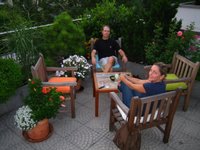 I grilled some pork roast (Mrs. TBF made a rub of freshly chopped herbs from the garden and wrapped it in bacon...awesome, but I still have to work on her interpretation of "impromptu"!) and some pork chops, Andy and Di brought some dessert and wine, and John, Rammy, and Olli also brought some wine when they stopped by at around 10:00 p.m. while on their way from the airport after returning from a trip to Spain (how's that for partying dedication?).
I think I.F.F. was a big success, and it will continue as long as the weather continues to cooperate. The forecast for this Friday, as of today, is for a 20% chance of rain.
Expect a call...
Posted by The Big Finn at 7/24/2006 07:25:00 AM

Now that sounds like fun. I know you are just itching to call us for the next one. ;-)

One a yet seriously funny note, just wanted to let you know that the mayor of Chicago or someone like that is now supporting banning eating bad food in Chicago. Basically you wouldn't be allowed to eat a burger and fries because it could make you fat. Of course, this is just the silly extreme like Fois Grais you aren't allowed to eat either...

I guess this all came about because Chicago is just one fat city of people...

Not my words, but thought it was a little funny yet interesting.

That sounds like fun....I wonder if the rest of the people in that building talk about you. I can just see it now, two business men are riding the elevator down on a Monday morning and the conversation goes something like this:

Of course it would be all in German.

Just as a spontaneous hint: we're at home on Friday and have no other plans. Was that rude? ;-)

Oh.. And I forgot to say: They ARE SPYING on you. It's a Swiss tradition, only they call it "neighbourhood watch". Wouldn't want anything happening to you... without them knowing, of course ;-)

Have you thought of inviting them over? ;-)

OF COURSE they are spying on you. Even Swiss are European, and Europeans spy on their neighbours. It is our way to show we care.
I knew, for a fact, that across the street lived a girl, who had the habit of walking nude into her kitchen early mornings, open the fridge and drink milk from the carton. Well, my entire house knew she was drinking milk nude in the flashlight of the fridge, and she became something of a local celebrity.
But hey, that distracted me from my point. Nothern Americans may be having fun every once in a while, but you are still a Big Finn and Finns don't. Explain that!
:P

CS - Keep Friday evening open. We're still monitoring the weather, and we'll call you on Wednesday if it looks like it's not going to rain. The Fishbowl demands nice weather.

Karen - I have thought about it...for a second. However, the first problem is the language issue. While I could get by with a combination of German, Finnish, English, grunts, and hand gestures, Mrs. TBF's German vocabulary is limited to about 25 words. It would just be too hard. But who knows? "Sprechen Sie Englisch? Yes? Come on over!" I might have to give it a try. For the record: Mr. & Mrs. Bruno speak ZERO English.

So you won't be alarmed if we just show up some random Friday night? Are month-old babies allowed in the Fish Bowl?

Gretchen - of course...that would just add another level of entertainment for all those on watch!

That sounds like such fun, wish I could come too! :) You have a beautiful garden TBF, it's very nice you found a place to put your formidable gardening skills to work. I bet that's one reason all those neighbours really enjoy looking at your little fishbowl. Fishbowls are always nicer with real plants decorating them ;) The tiny place I have to plant things is too shady for such nice bright flowers, I have had to make do with ferns mostly, and now the heat/humidity is killing off the greenery...aahhh summer in the south.