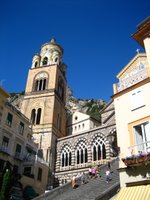 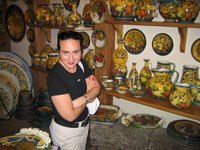 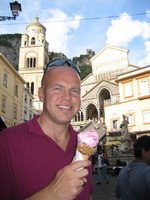 Our trip to Amalfi was without incident. The flight departed and landed pretty much on time, one of our suitcases was the first one out on the conveyor (the second one came out twenty minutes later...), the driver was waiting with his little sign, the 1:20 transfer to our hotel up and down mostly switchback roads was completed without any head-on collisions, and we arrived at our hotel at a little before 14:30. I think we would have made it faster, but we had to have the slowest, and most cautious driver that Italy has ever known. Well, I guess, better safe than sorry.

We heard a lot of "welcome-a back"s from the hotel staff - which is always nice. I told Mrs. TBF that I find it pretty amazing that they remember (or, at least, pretend to remember) us, which prompted her to say: "They don't remember US...they remember YOU!"

We checked into our room, arranged for a technician to come up and fix our non-functioning phone and "complimentary" (after paying a zillion Euros per night) internet connnection, changed into our non-travel clothes, and made a bee-line for the "complimentary" hotel shuttle bus to Amalfi. On the way out, I "greased" the concierge so that he'd be sure to take "super-primo" care of us, and then I greased the shuttle bus driver for no reason other than to grease, and, a few minutes later, we were in the center of Amalfi.

Amalfi is great! It has a nice cathedral, a plethora of shops where one can buy all things Italian, and numerous gelati stands. We walked up to one of the stands, and I decided to try a flavor of gelati that I thought I wouldn't like. Huh? Why would anybody willingly try something that they might not like?

Well, here's the answer to that question: It's part of my ongoing efforts to recreate myself? For example, I announced to Mrs. TBF a couple of months ago that I am going back to my Canadian roots, and I will from now on pronounce "again" as "a-gane" instead of "a-gen" and "been" as "bean" instead of "ben". But, that's for a future blog entry...

Getting back to gelati...

Yesterday, my announcement of "reinvention" to Mrs. TBF was that I am now going to try to move away from always ordering the same things. Normally, I would go for straciatella. However, I decided to go for the cherry flavored (amarena) gelati. Don't get me wrong - I love raw cherries. However, I tend to hate (or think I WILL hate) anything that has cherries which have been ("bean") processed in any way such as baking, etc. So, I ordered the cherry gelati, and....I LOVED IT!!!!

Ahhhh fungu! Now that I've discovered I like cherry gelati, I'll have to order a different flavor next time. Maybe pistachio? I love plain old pistachios, but I hate the flavor (same with almonds) when they've "bean" processed in any way (liquor, etc.).

I have told TSK a million times that I am having a new life style or reinventing myself etc... I however keep returning back to myself.

TMS - What am I supposed to grab? My nuts?

I am now wondering how much Canadian accent I stil have with all the different english speaking people around me...

How dare you not remember that Mr. Reynolds used to say that whenever anyone said you're nuts. Many times we would be at the Reynolds house and someone would yell, "You're nuts!" Then Mr. Reynolds would chime in from another room, "grab 'em."

TMS - Sorry...I didn't really hang out at the Reynolds house as much as you did. I don't recall ever having heard Mr. Reynolds say that.

oh man - I stop reading for one moment and you post a ton of incredible sites and info of your absolutely beautiful stay! Yum on the gelato!