Is It My Imagination...?

...or did July just whizz by? I can't believe it's already August.
For those of you who don't know it, this was a holiday weekend here in Switzerland. Yesterday was Swiss National Day (...kind of like U.S. Independence Day or Canada Day), and it was a FIVE-DAY weekend for Mrs. TBF. That's right...five days off, back to work for three days, and then another weekend is here. Three days of work out of ten...not bad! 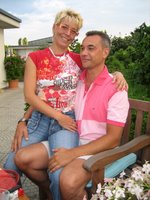 There was a threat of rain on Friday night, so we opted not to have a "Fishbowl Friday". Instead, we had Canadian-Swiss and Orange-X over for dinner on the balcony. We did, however, manage to squeeze in drinks and appetizers in The Fishbowl (and snap a photo) before the storm clouds drifted in from the West.
Why does Orange look so serious? Well, it's because I've accused him of always talking and having his mouth open in every picture I've ever taken of him. He ended up concentrating so hard on not having his mouth open that he ended up looking all serious. We'll have to work on that in the future...
We had a really nice dinner on the balcony. One of the highlights for me, believe it or not, was this zucchini carpaccio recipe that Mrs. TBF made from Epicurious. Even though we were on about Day-10 of garden zucchini, I'd have to say that it was a definite repeater! 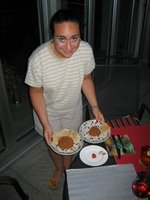 On Saturday, we went into town, bought a few things, and had a nice dinner for two on the balcony. Ummmm...I guess it was dinner for three if you count King. We picked up some Brazilian steak tartare in town, Mrs. TBF added a bunch of stuff to give it some zip, and we enjoyed it as a nice appetizer. She even put a plate of it out for King. He took a couple of sniffs, licked it a bit, and then walked away. I couldn't believe it! That BEAST eats everything, but he would NOT eat that tartare. And, since he had licked it, there was no way I was putting that stuff back on my plate. What a waste of perfectly good raw meat!

Sunday...since the weather looked promising, we decided to have an Impromptu SUNDAY in The Fishbowl with the Expatters and "the boy Andy" (as we like to call) who ended up coming solo. I grilled up some duck magret (the breast of the duck used to make foie gras) on the Weber. Although I think I grilled it for about a minute too long, it still tasted pretty good. We ended up having great weather, and a fun time, but then Anneliese decided she wanted to go home. I did, however, manage to snap this nice sunset picture using the timer right before the Expatters left. 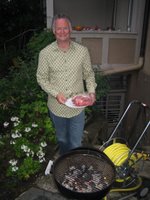 On Monday evening, we were off to John and Rammy's house. I didn't tell them this, but we ate lamb on Friday night, lamb on Saturday night, AND...you guessed it...when we arrived, John plopped a nice big leg of lamb on the Weber. But, no matter...I LOVE lamb - eating lamb three out of every four days is NO problem for The Big Finn!
After a really nice dinner, we walked down the street a bit to a vantage point overlooking Basel. Although I had read on the "This non-American Life" blog that Zurich had opted not to have fireworks due to the dry conditions, Basel had apparently decided to go ahead with theirs. From our vantage point, we had a clear view of the fireworks, BUT without the crowded mass of humanity which was downtown Basel at that point. Am I the only person in the world who doesn't really get that worked up over fireworks? I mean, they're pretty cool for about five minutes...and then they get kind of...boring. Maybe it's just me...
Tuesday...yesterday...was Swiss National Day. But, I'll talk about that a bit later...
Posted by The Big Finn at 8/02/2006 09:10:00 AM

sounds like a really fun time! Love all the pics (thanks for sharing). Yeah I guess I must have an effect on everyone because they are all photo shy... oh well.

I love fireworks! I think you are just being obtuse, ya fag.

TMS-
Fag? ...nice!
I fail to see how not getting "...that worked up over fireworks" would qualify me as being obtuse, but...whatever.
I hope you are enjoying your holiday.

What gets you all "worked up"?

Actually, in your new profile picture it looks like the fireworks are coming out of your pants! I think that qualifies as "worked up".

Thanks again for a lovely evening and great food. By the way, nice new profile pict, TBF!

Colon Blow- Those are regular glasses ;-)

Mmmm... that zucchini carpaccio sounds delicious. I'll have to try out the recipe.

Apparently my Anthony DiGiovanni accent does not come thru in the written word. The use of fag and obtuse were intentionally wrong. From now on, I will let you know i am being Antny.

TMS -
I would have written it this way...

I love fireworks. I t'ink you is jus' bein' obtuse. What is ya, a fag?

Now dats Ant'nee...and that's an inside joke that nobody else reading this blog gets at all...except for you, Sour Kraut, Mrs. TBF., me, and maybe Colon Blow.