Mrs. TBF is Italian-American. For nearly twenty years, I've been telling her that her Italian heritage necessitates garden statuary of some sort. As far as I'm concerned, if one is Italian, a garden statue is not only a birthright, but a birth OBLIGATION! Sure, I bought a little garden buddha a couple of years ago, but that doesn't count.

Last week, I had to go to Coop Bau & Hobby for some odds and ends. While I was there, I noticed that they had a sale (25% off!) on assorted garden statues. There were little Japanese temples, fountainy looking things, various types of little animals, and one particular thing that caught my eye - a bust of David.

I came home and excitedly told Mrs. TBF about my discovery, and, quite honestly, wasn't met with the level of fervor I had anticipated. Nevertheless, I made the "managerial" decision today to return to Bau & Hobby for my...I mean...Mrs. TBF's statue.

I rolled up the shopping cart right next to David (there were two to choose from), and then proceeded to nearly throw my spine out of alignment lifting up the concrete monstrosity! I'm not joking...that behemoth had to weight every bit of 50 kilos/110 lbs. With an "old man" grunt, I managed to lift the brute onto the cart, roll it to the cashier, pay, roll it out into the parking lot, and then grunt another time as I lifted it into the Jeep. Then, when I arrived at home, I had to...lift it out of the Jeep, put it down and lift it up twice so I could go through two sets of doors leading from the garage to the elevator, get it into the elevator, and then carry it up the fifteen or so steps leading up to The Fishbowl. 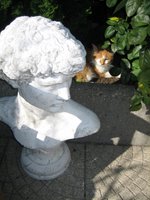 I found a nice spot for David right by Mrs. TBF's rosebush, and I have to admit that he's a nice addition to The Fishbowl. And, as an added bonus, King seems to have made a new friend. King and David - best friends forever!

Ha! And here I was, blissfully unaware of this requirement for expressing my Italian-Americanness.

On a completely unrelated note, I have just inherited my grandparents' living-room lamps. The stems are white plaster statues of boys wearing laurels and holding grapes. Alas, I have to wait until my next trip over to the new country to retrieve them.

We are currently awaiting a design from a landscaper we retained to redo our property. I will have to inform him about my "birth obligation"!

LOl - I think my grandparents had that statue in gold or bronze on their mantle next to one of their fireplaces. I guess my memory fades as it's been well over 15 years since it was my final time at that house.

I had a bust of David, but his head came off in one of the moves, so now I just have have the bust part of the bust!

King? David? Is this your first step towards converting and becoming jewish?

What would go really well with that is a set of extra-large German garden gnomes...