Grill Envy (And Other Tidbits)... 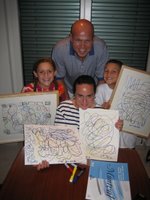 This past weekend was a great weekend!

On Friday night, we "babysat" Sam and Alie. Our Christmas gift to Andy and Di last December was a coupon good for "babysitting" services (I use quotation marks because the kids ain't babies no mo') so that they could go out on a date. This past Friday was collection-time.

We ate some fajitas, created some group art, and watched a DVD ("Meet The Fockers"). I was the slightest bit worried about showing them a PG-13 movie - and a couple of times I felt the need to blurt out a loud "LA-LA-LAAAAHHHHHH" so the kids wouldn't hear the sexual references which they totally understand anyway - but I have to say that I think we did a fairly good job of being parental for a few hours. Yup...the kids didn't drink, smoke, or cuss while on our watch which translates to an "A" grade for us as adult authority figures as far as I'm concerned.

Sam and Alie were supposed to stay the night, but plans got changed and Andy and Di ended up picking them up so they could spend the night in their own beds. However, the whole gang ended up returning for breakfast on Saturday morning for Bloody Marys (adults only), pancakes, bacon, eggs Benedict, etc., etc. It was a great way to start the day.

On Saturday evening, we hosted Diagnostic Dave. Since he was a bachelor for the week (Jx was on the way back from a business trip in Kuala Lumpur), we decided that he was in need of a proper gorge-fest. We picked up some nice American steaks at Globus to go along with fried calamari, mashed potatoes, some nice wines... And, the rest, as they say, was history!

On Sunday evening, we went to Mark (a co-member of the Brotherhood of Men With Sugar Mamas) and Lisa's place in Basel. One of the guests - Martin - doesn't really speak English which meant that I was forced to speak some German. This made for an interesting evening. I'd say that I speak a hair more German than Mark, and I'm sure that we were endless entertainment for Martin (and the other guests).

Lisa is a great cook, and she really put out a fine spread. However, the highlight for me was their unbelievable Viking grill that they moved here from the U.S. 1.5 years ago. Lisa told us that when the grill was moved into their apartment (from the street with a special lift) they noticed people in the neighborhood looking out of their windows and pointing. Nothing like creating a "starefest" in Basel (not hard to do!).

We ate American steaks (second night in a row!), drank some mighty fine wines, and had an all-around fun time. However, I couldn't get that damned grill out of my head - neither could Mrs. TBF apparently. She ended up finally coming around and "giving me permission" for a new grill that has at least one side-burner. If you'll remember, I regretted not buying the next-model-up grill moments after setting up Helmut last year. All it took was her seeing Mark and Lisa's grill's side-burners cranking out massive BTUs, and she was sold!

I'm thinking of moving Helmut up to the Fishbowl and buying a new grill for the balcony. Excessive? Maybe!

sounds like a fun time and great food! I'd do it for stares too. :)

Man! That's already half a kitchen!

You're a much better baby-sitter than I! I would be the one saying "hey come here...try this...drink this....no don't blow the smoke out your nose it hurts more"

Oh well, I guess that's why God made me gay so I wouldn't influence unlucky children -- he knew what he was doing!

I think you sound like top babysitters... The kids of today need more "cool" babysitters and not bitter old women, who seem to make up the majority of the worlds babysitters as it is...

Funny, I don't ever remember us getting a babysitting coupon from you as a gift? Hmm...

TSK -
Your kids are good now, but when we moved away six years ago....they were a little bit...of a challenge!!! Plus, diaper changing duty was, is, and never will be part of our babysitting repertoire.