Fattening Up Fat Sal in Basel...

Fatten up Fat Sal became our mantra after Fat Sal announced to Mrs. TBF upon arriving at our apartment that he was on mission to put a little fat onto his nearly fat-free frame. The challenge was set...

I met Sal at the airport at around 9:30 p.m. on Friday evening, and we took a taxi home. After a leisurely martini, and a Sal-getting-to-know-King session, we all sat down to a late-night cheese fondue dinner. Not any cheese fondue dinner, but a ONE KILO (2.2 lbs.) of cheese fondue dinner. Unbelievably, "we" (mostly me) ate...it...all!!!! We continued talking and drinking wine into the night; finally making it to bed around 2:30 a.m. 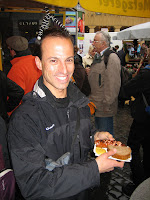 On Saturday morning, we went into town to meet up with Canadian-Swiss and Orange-X. We took the bus, and Sal experienced Swiss precision first-hand when we had to switch buses at one point during the journey. Our bus stopped, we stepped out as the next bus was pulling behind the first bus, and we hopped on. Yes, Sal was amazed! We jumped off the second bus at Spalentor and wandered down the the streets of Basel toward Marktplatz. Of course, we first needed a little "fattening-up" snack (about 45 minutes before eating lunch), so we stopped for a sausage at the Eiche sausage stand. 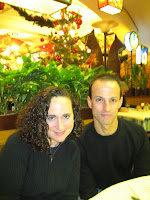 After our snack, the three of us made our way down the "clean and safe" streets of Basel to Zum Braunen Mutz to meet up with C.S. and O.X., and to stuff Sal with a few hundred calories worth of rösti. After lunch, Mrs. TBF went back home to begin preparing Sal's next caloric intake, and the four remaining bloggers set off on a small walking tour of Basel.

We set off through Marktplatz, up the hill toward the Munster, and then took the ferry across the Rhein (pretty much the reverse of my standard walking tour). It was at this point that I felt that Sal was burning too many calories, so the four of us stopped in at Fischerstube for a beer. Well, at least Sal and I had beer. Of course, C.S. and O.X. had to be troublemakers by ordering a panaché and rum & Coke respectively. Who drinks panaché and rum & Coke at a microbrewery for god's sake? Jeez!

It was getting dark by this point, and it was time to head back to the apartment. By the time we arrived, Mrs. TBF was in the midst of a cooking frenzy, and Sal was feeling a bit tired from lack of sleep and extra calorie consumption. Sal relaxed for a bit, I did a quick vacuuming and recycled before the 8:00 p.m. curfew (Sal: "WHAT?!?!? 8:00 p.m. curfew?!?!??!?"), and then the guests began showing up.

The next morning, we got up around 11:00 a.m. Well, at least Mrs. TBF and I did. Sal got up at something like 7:00 a.m. (probably woken up by King's howling), and didn't go back to sleep. At around noon, Mrs. TBF made one last-ditch effort of pumping calories into Sal with omelettes and bacon.

Sal ate snacks, cheese fondue, sausage, rösti, Italian food, an omelette and bacon, drank wine, beer, and a martini. And...when he left? I think he had maybe...MAYBE...gained about one ounce!!!!

What will it take to fatten up Fat Sal?

We said our goodbyes to Fat "Euro" Sal on Sunday afternoon as he got onto the airport bus at the train station. The next time we see him, he'll be Fat "American" Sal. Let's see what happens when he returns to Chicago. I'm sure we'll be checking up on him there in the not-too-distant future for a B.M.I. check.
Posted by The Big Finn at 12/04/2007 05:50:00 AM

Damn! Your story almost matches mine! How's that?

We should've had a second beer at the microbrewery.

Catch you on the other side. There will be a mountain of smoke-perfumed pig parts waiting for the two of you at my new house.

Oh yeah, it was more than a pleasure to meet up with Sal. A big thank you to you and Mrs TBF for an (as always) warm welcome at your place after the Basel stroll. Dinner was excellent as usual and the company was absolutely fabulous. Looking forward to New Year's Eve with the happy bunch :-)

I agree, rum and coke at a microbrewery is sinful.

Re. Sal -- My relatives have been on a similar campaign to fatten me up for years, but I look like a cow next to Sal. They would have a field day cooking for him!

cs- I'm still not so sure about that blue-green picture of yours.

ox - I think it's about time that you updated your picture. Perhaps you could find a picture where your face is orange; it would go so nicely with cs's blue-green hue.

I'm a light shade of green. Envy, not nausea. I KNEW you'd all have a great time.

Am I wrong in thinking that the lovely Mrs. TBF and the cutie-patootie Sal look like brother and sister in that picture?

christina - You know what? I never thought about it, but you're right. They do look like brother and sister! OMG!!!

What?= You can recycle until 8 pm? Our recycling curfew is 7!

Basel really is more laidback. Must be your proximity to France...

Now that sounds like so much fun! Geeze a problem with weight gain.. Wish I had that problem too!