The blogosphere will be happy to know that our whirlpool - that we never use because it emits a nasty smell when you turn it on - has been repaired. Correct that: we use the tub, but we never turn on the jets.

Interesting stuff, huh? Read on, unless you have something better (highly likely) to do.

I received a call totally out of the blue last Friday at 5:15 p.m. from some guy speaking Swiss-German. I told him I couldn't really understand him too well, but I managed to pick out the word's Duscholux (the brand name of our whirlpool), the name of the company that owns/manages our apartment building, service, and termin (appointment). Before I knew it, I had an appointment to have our whirlpool repaired (even though I hadn't requested a repair) on Tuesday at 1:00 p.m.

Of course, I ended up having to go through this long, drawn-out ordeal yesterday when I called the management company's office to make sure that they had actually requested the repair and that I wasn't just going to be letting some psycho off the street into the apartment. After waiting several hours for the office to "investigate" I called back and found out that it was, indeed, an authorized repair. It turns out that there have been some problems with the whirlpools in the apartments that have them, and the landlord has decided to have them all looked at whether the tenants have complained or not.

Let's zip ahead to this afternoon at precisely the stroke of 1 p.m. when my door buzzer rang. I heard the word Duscholux over the intercom, and a bunch of other Swiss-German words, so I figured that it had to be the repair dude. Well, it was either him or a Jehovah's Witness who wanted to use our bathtub. I went downstairs, saw a guy in the front lobby wearing a uniform and carrying a toolbox, let him in, and brought him upstairs in the elevator.

About an hour later, I had a new button on the edge of the tub, detailed verbal instructions (that I didn't really understand) explaining how our new button works and what it's supposed to do, and a bunch of dust and repair residue that had to be vacuumed up. The repairman told me that the whirlpool was as good as new and that I should give it a try (I had told him that we never use it). 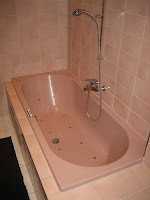 Does that mean that I have a new translation job? Maybe they can fax/e-mail you the instructions. I still owe you one for the self-cleaning oven, but you never brought out the manual.

tsk - No, not yet. Maybe Mrs. TBF and I will give it a "whirl" this weekend when we take our weekly, Sunday evening bath together.

that tub looks like something out of i love lucy LOL