The transfer of all the info from our old Mac to our new MacBook Pro took place without a hitch, and now we're off and running. Well, almost without a hitch... At first, our iTunes didn't load up into the new one, but a quick software update (Already? I just bought the thing last week!) followed by a restart, and we we were REALLY off and running.

As you can see from the artistically blurry picture, our old laptop had developed a bunch of lines in the screen that were beginning to become a bit annoying. So, 'annoying lines' was as good excuse as any to buy a new one. This time, I opted for the smaller screen because the 17" screen was both unnecessary AND a bit of a hassle when traveling. 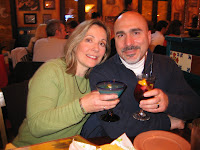 We'll continue using the old one until it conks out, and then we'll replace it with the new MacBook Air so that we can be total computer geeks by being online at the same time e-mailing each other even though we're sitting right next to each other on the sofa. That'll be even geekier than when I noticed my S.I.L. and B.I.L. speaking to each other last week on their cellphones even though they were both inside the same house.

Tonight, we set up Mrs. TBF's new iPod Touch - which I noticed is already out of date (...bought the thing less than a week ago for chrissake!) because Apple just announced the new 32GB model (we bought the 16GB model) today!

I could just sit here and play with this thing all day...

Shouldn't I be at the gym?

Can I ask which of the three MacBook Pros you got? We're still seriously thinking about it but haven't made any decisions yet. (Actually, we haven't even decided between the MacBook and MacBook Pro yet, but are leaning toward the latter.)

TBF--thanks! I've basically been looking at the cheapest one and the next one up, so that's helpful since I also wasn't sure whether the faster processor (and I think larger hard drive) made it worth the extra $$$...

The macbook air has some fairly serious bling action going on. It's pretty cool, and it'd be much better hauling that around rather than this heavy, old, little iBook that I've got with me up in Disentis this week. The MBA would certainly be a great thing to have when you're flying in First Class.