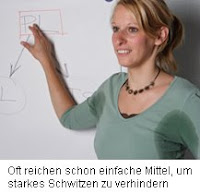 I'm not really sure why, but I sweat like a freakin' pig whenever I am put in a situation where I have to speak German...and, spend money...but that's a different story altogether. It's probably due to nerves, but should I still be nervous about speaking German after having lived here for 7+ years? I don't think so. But hey...whatever!

Today was Day 2 of bathroom ceiling repairs. Yesterday, the guy who scraped the old plaster off the ceilings (without a protective mask, mind you) spoke perfect English. We talked a bit while he worked, and it was all in English.

This morning at 8:00 a.m., a different guy came in to apply a new coat of plaster. This guy spoke no English. No, correct that... He said "hoppy bertday" to King, so he knows at least two words. I also spoke with today's worker in short bursts while he worked, but the conversations were completely in German.

At one point, I looked down and I was both horrified and amused to find that I had the classic OMS (I call it "old man sweat" for various reasons) just under the "moobs". I immediately pretended that I had to do something in the kitchen where I proceeded to wipe myself down with a paper towel and let the shirt dry a bit. A little bit later it was the same thing: speaking in German, OMS, kitchen excuse, and paper towel. However, this time I went to the bedroom and changed into a white t-shirt.

I get the same thing! Only my sweat is usually on my brow and upper lip, I take a handkerchief to Deutsch class to keep myself dry.

From an e-mail I received from my friend Dr. John of Basel...

I thought I'd help you sleep [I often feign sleep when Dr. John goes into one of his "long-winded" scientific explanations]!
When you get excited, nervous or afraid (the fight or flight response) you activate the sympathetic nervous system. This connects to sweat glands and causes increased sweating. Hence your propensity to sweat when you speak German.
What surprises me is that you get nervous about this as you always appear so calm and confident.
Cheers mate,
John