Mrs. TBF and I decided a LONG time ago that we didn't want to have children. When we first got married, we thought we'd eventually start a family. But we decided to wait three years. Before we knew it, our third wedding anniversary was upon us. We talked about it, but we decided we weren't ready and that we'd wait a couple more years.

When we were in Hawai'i in 1997 celebrating our tenth anniversary we talked about the whole "starting a family thing" and we decided then and there that neither one of us really wanted to be a parent...ever! Of course, it wasn't until last year that I took the "final step" to ensure that I would never father a child.

Although I'm 100% happy with the decision to not become a father, there is that teeny-weeny voice in the back of my head that wonders what our children would have looked like. Today, while reading some blogs, I came across a website that allows one to upload two pictures to see what their children would look like. The site is: 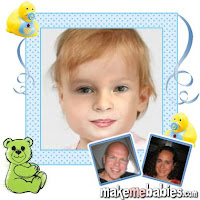 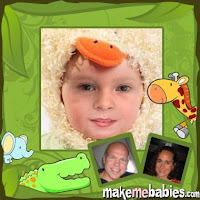 Our daughter would have looked like this. She actually would have been kind of cute. After seeing these two pictures, I definitely would have preferred a cute girl to a son with a freakishly lopsided face.

Of course, curiosity got the best of me and... 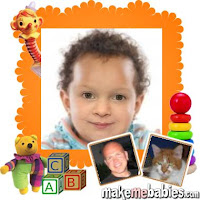 Here would be the result of the immaculate conception (ABSOLUTELY NO MATING WOULD BE INVOLVED) between...me and King. It's strange that I never noticed, but apparently King is black. Who knew? 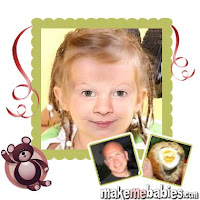 Had my man-seed somehow fertilized a Scotch egg...THIS would have been the rather unfortunate offspring.

And last but not least... 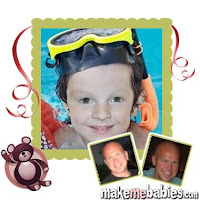 Had I somehow managed to clone myself, the result would have been...

...a child who looks absolutely nothing like me whatsoever!

Email ThisBlogThis!Share to TwitterShare to FacebookShare to Pinterest
Labels: chip off the old block, happy with our decision

Both Alex and I found the last three pics HILARY ASS!!!
Also, I didn't know your cat was black.... Also, all of your offspring have freakishly feminine lips-- esp, the one with you and the oeuf!! Very odd, indeed...

Haha - that was pretty funny!

Very funny, FInn. Scary as it sounds, your third virtually baby looks an awful lot like the one I posted a couple days ago. You didn't virtually kidnap my baby, did you. ;-)

Let's all be happy you never decided to mate with a Scotch egg in real life. Well done.

Ok - I'm scared. I guess I need to get on the next flight home and make sure King's ok and the eggs are in the fridge where they belong!
Actually, I'm a little irritated that the offspring from you and I are more like you than me...proving that 51% Finnish thing you and your dad are always claiming about "mixed" Finns.
Miss you.

I understand what you mean though, I've never had that desire to have children myself. I've always said that if someone is going to be calling me Daddy it is NOT going to be a 2 year old, that's for sure!

Well...I suppose it would be Ok, just so long as the Scotch Egg agrees to raise your child Catholic.

what's up with the giant ducky that is swallowing your faux-daughter? yikes! Liz

I was going to comment but I drew then line at commenting from work, and after reading that post, remind me not to read your blog at work, King is black! I snarfed my coffee EVERYWHERE.
God punishing me for wasting valuable work internet resource.