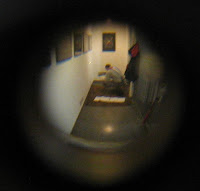 For the third time in a week, there's an elevator repairman (as viewed through our peephole) working on our building's elevator.

I'm beginning to get worried.

I sure hope he doesn't have to shut that thing down long-term - which I define as more than two hours - due to having to wait for some part or something. That would really suck!

We live on the 4th floor, which would be correctly called the 5th floor by North Americans, but is INcorrectly called the 4th floor by Europeans due to their erroneous insistence on labeling the (North American) 1st floor as floor 0. Or, often as "EG" for Eingang in the German speaking parts of the world. Hey, I'm not one to start conTROversy or anything, but calling the first floor you see ZERO when you walk into a building is just plain...well...stupid!

So, getting back to the elevator. It would really suck if we had to take the spiral staircase in the center of our building to/from the TOP FLOOR on an on-going basis. Speaking from experience from the few times I've done it, it's a dizzying enterprise, and one which I would be happy to never have to do again. Plus, the thought of having to climb all those stairs with a bunch of groceries or after having done forty minutes on the elliptical trainer at the gym seems downright cruel.

I might have to go live in our storage unit on the ground floor (compromise!). Or, maybe I should go into hermit mode and just not leave the apartment. Or... 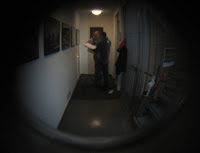 A short time after posting, I heard a ruckus coming from the hallway outside our apartment. A quick look through the peephole revealed TWO arguing repairmen - one was shaking his head saying "nein!", and the other one was emphatically pointing at a page in the manual.

Things were not looking good.

However, a little while later, the repairmen were gone and it appeared that the elevator was as good as new. Just to be sure, I've decided that a grace period of a few hours is in order: I'm letting the other residents in the building be the guinea pigs. I don't need to be free-falling down an elevator shaft from the fifth... I mean, fourth floor.
Posted by The Big Finn at 4/02/2009 07:20:00 AM

Hm, I just came over all nit-picky and had to tell you that EG is 'Erdgeschoss' in German, ie 'ground floor'. Sorry! :0)

Patricia - I was wondering who would be the first person to point that out. I was betting on CanadianSwiss, but no...

Love the peep hole pic! It cracks me up.

Gosh, and I NEVER win anything!

Actually, I was discussing exactly THAT with OX after I read your blog yesterday, but my explorer crashed and I didn't log on after that. But Patricia can have the prize ;)

BTW: Another thing we discussed: We both agree that calling the ground floor the first floor makes no sense. It's like calling the sidewalk a first floor too. Why? Cou come into a building on directly from the sidewalk and all of a sudden, you're one floor up?? Nope. But, Im sure sure you were expecting that :)