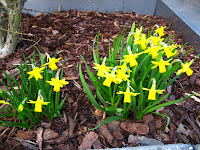 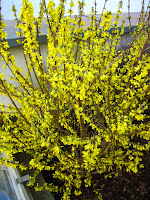 Here's what's blooming in the rooftop garden at the beginning of April: not much!

So far, pretty yellow! But it's a sign of warmer days to come.

We had probably the coldest winter since moving here in 2000. I'm guessing that accounts for the fact that the forsythia is blooming nearly two weeks later than usual. In fact I went back through my pictures and found a picture of the same forsythia bush in full bloom on March 20, 2007.