I experienced a major life milestone while I was in Chicago.

On May 7th, at 3 p.m., I showed up at my cousin Greg's office for an eye exam - don't worry... he's an opthamologist. In fact, I arrived fifteen minutes early. God, I'm such a Swissy! Even he wasn't there yet!!!

First of all, I'd like to say that I successfully took public transportation from my sister's town in the northwest suburbs to my cousin's office on the nort'side of Chicago. So, who says you can't get anywhere using public transportation in America? It only took about 30 minutes longer than it would have if I had gone by car (assuming absolutely no traffic), so it wasn't too bad at all.

After Dr. Greg examined me, my suspicions were confirmed: I now need glasses for reading!

Greg told me that my distance vision was perfect, and that I should just pick up some cheap reading glasses (the lowest magnification possible) at a drug store. So, that's what I did. Kind of...

Never being one to pass up an opportunity to go to Costco, I did just that and picked up a three-pack of reading glasses for about $20. Oh, and by the way, I checked out the price last week at our local grocery store in Basel, and...

My glasses are now positioned on the bidet/magazine rack in our "library", in the TV room for when I want to read instead of watching yet another one of Mrs. TBF's cooking programs, and on the desk in our office to be used when blogging or surfing the net. 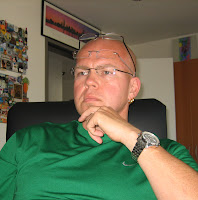 That is... when they're not all on my head simultaneously for display purposes only.

I actually thought I was being very frugal by getting three pairs of glasses for $20. However, my dad one-upped me. 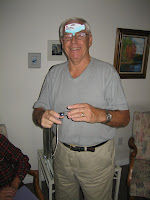 While I was in Sudbury, my dad told me that he had to get a new pair of prescription glasses. Apparently he had to wait a week before getting them, so he went to the drugstore to buy a pair of cheap reading glasses. Oh, and here's the best part...

HE LEFT THE PLASTIC TAG ON THEM SO THAT HE COULD GET A REFUND AFTER RETURNING THEM AFTER RECEIVING HIS PRESCRIPTION GLASSES!!!

Email ThisBlogThis!Share to TwitterShare to FacebookShare to Pinterest
Labels: Costco reading glasses, life's milestones, my cousin Greg, my dad a.k.a. the master of frugality

Soon, you'll realize that leaving a pair of glasses at strategic points doesn't always work. The phone will ring, you'll push your glasses up on your forehead, walk to the phone, you'll put them down somewhere, talk and walk around, put the phone down, walk back to where you were and wonder: "Where the heck did I put my glasses."

BTW: Your Dad's frugality cracks me up. Really!

LOL - your dad is a hoot! Sounds like something mine would try too.

I wish I could get away with buying reading glasses at Costco, but alas, my present regular blind as a bat glasses cost me EUR 450 so I have NO idea how much a pair of reading glasses would cost. Right now I'm getting by with taking off regular glasses, squinting right eye (the useless one) shut and reading with left eye.

Hmmm....your father and I use the same magnification for our reading glasses.

I agree... Now the question is are you looking for a way to show your dad up... laughs... But what a great buy!