I Forgot To Mention...

Lausanne was actually the first place we traveled to (other than day trips) after moving to Switzerland. We took the train to Lausanne, checked into the same hotel we stayed in eight years ago, unpacked our overnight bags, and... then I watched Mrs. TBF break out the laptop so that she could take care of some important work e-mails.

But hey... no worries! That just took a few minutes.

We went down to the spa, swam in the pool, went in the sauna and hammam, and just plain relaxed. Afterwards, we had a drink in one of the hotel bars before heading out to dinner at a restaurant called Hôtel de Ville in nearby Crissier.

The restaurant was FANTASTIC! Perhaps the best meal I've ever eaten: definitely in the top five. Waiters in tuxedos... 11 courses... great wines... etc. I even wore a suit... and a tie! Of course, I could go on and on, but I won't. Just go check it out for yourself if you're ever in the Lausanne area. It's expensive, but worth it! 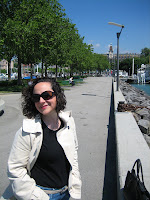 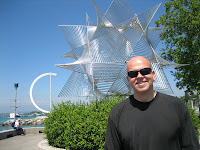 The next day, we woke up still full from the night before, but we managed to make it downstairs for breakfast anyway. After breakfast, we tried to burn off a few calories by walking along Lac Léman a bit, and then it was back to Basel. Short... but sweet!

AHHH!!!! You two are so cute...Happy Anniversary. Looks like you had great weather for the short but sweet trip.

Remember how I mentioned that I got the best burger EVER (at least in Switzerland) in Lausanne? It was in the hotel bar at the Palace Hotel! You missed your chance! Oh well, I suppose your dinner our might have been just a little bit better...

That is so cute. We also celebrate our "Fakeiversary!"