Do you have a foreign bank or securities account? If you're an American person living abroad, then you probably do. 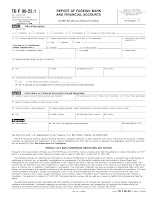 Did you know that you're required to file IRS form TD F 90-22.1 by June 30, 2009. That's the "Report Of Foreign Bank And Financial Accounts". On this form, you have to report all of the foreign bank/securities accounts you held in 2008. This year, the form has been revised from previous years. On the current form, you have to list all sorts of details such as: Maxiumum value of account during calender year reported. You didn't have to report that on the previous forms.

The penalty for not reporting your accounts to the IRS? $100,000!!! Of course, our accountants told us that they have not heard of one fine being levied... YET!

I can understand the U.S. government wanting to keep track of Americans with foreign assets. I mean, there are a lot of tax cheats out there. However, do they really think that somebody attempting to avoid paying U.S. taxes by hiding millions of dollars in an offshore account is really going to file this form - OR, even worry about a $100,000 fine??? Instead, I end up filling out the forms, spending $7.00 (twice) on sending them with a proof of mailing from Switzerland because I have to send my forms and Mrs. TBF's forms separately just to make sure that at least one set gets to the IRS (...kind of anal that way!), and all this just so some IRS clerk on the taxpayers' tab can just sit there entering numbers into a datafile that will probably never be used anyway?

What a waste of time and resources!

Isn't it about time the U.S. adopted a better method of taxation???? Anyhoo... Our forms are on there way to the IRS as we speak.

The forms must be postmarked one week from today. You better sharpen those pencils.

i really need to do this, i have been putting it off since March, ugh.

Thanks for the reminder...

this is so bs!

Ugh, Fairtax? You can't be serious... I mean, I hate having to send my forms overseas as well, but my family would be super-duper screwed if fairtax ever became law. We're right in the sweet spot of the middle class that "consumes" almost all of our income on necessities like food, shelter, medical, etc. We can't cut that, so instead we end up paying 23% on all our income. Ugh. Of course, I'd probably just buy stuff off the new burgeoning black market that would follow in the wake of the fairtax, given that advocates of the fairtax want to do away with the IRS, so there would be no enforcement whatsoever.

But wealthy Wall St Bankers would do REALLY well under such a system. And we all know those are the folks that really need a helping hand right now.

A.I. - I pretty much disagree with everything you wrote. Have you read the FairTax Book by Neal Boortz and John Linder? If not, I suggest you read it. If you have read it, well... then... agree to disagree.

TurboTax told us to do this when we did our taxes this year. So we dutifully sent the form in, to have it rejected, because the TurboTax form wasn't updated. So they kindly sent us new versions of the form. Of course, no where to do they tell us exactly where the joint owner of the accounts is supposed to sign, so I'll just sign everywhere just to be safe.

hold up, how do you know how much your maximum amount in the account was during the year? I just use the one in my name for my salary...

ZMG - The joint owner doesn't sign. Each person sends their own forms, basically duplicating the other person's info. Unless, of course, you have some separate accounts that are not jointly held (i.e. work bank accounts, stock option accounts, etc.).

DP - I just went back through the statements, figured out the most we had in each account, and then multiplied it by what I considered to be the "official exchange rate" at the end of the year. Our U.S. accountant told us just to "...just fill something in that looks reasonable." Naturally, I tried to be as exact as I could.

There is also the better method of taxation which every other country follows...

The Husband just wrote to the his country 8 years ago, "dear not US tax authorities, I am leaving the country now. I will let you know if I come back. Taa-taa."

No forms, no fuss.

I'm filling it out for the first time in 10 years of being outside the US, oh well

To A.I. and all others unsure about the Fair Tax:

You will still be paying the same for your purchases !!!!

It's very distressing to see someone comment incorrectly on the Fair Tax!!
I even hear it on conservative radio -- Jason Lewis, the smartest guy on economics on the radio even doesn't understand it -- of course, he's never read the book.

It's usually ignorance of the Fair Tax, not malice (unless it's coming from a democratic hack trying to obfuscate the issue;>)


The whole point of the Fair Tax is that you are **already** paying the 23% !!
-- It's in the embedded cost of every item sold from the time of raw materials creation, to manufacture, to distribution, to sale.
Everywhere along the line there are many embedded costs:

1) corporate and personal compliance with the tax code - hiring accountants, hiring payroll people/service, etc.
Imagine how simple payroll would be if all the employer had to do to pay you were...
to WRITE A CHECK!!
(of course the next step would be to get rid of all State income tax, as well)

2) corporate income taxes (of course that's only on the actual profit, but it's still there)
Plus the overall drag of lost opportunity costs of the accountants, themselves, wasting time doing this busy-work of figuring out the code, figuring out how to avoid that same code, and then actually completing and filing the forms -- instead of doing *productive* work, like investment advice!

The whole idea is that the Fair Tax takes the embedded 23% tax out, reducing the cost of everything (assuming we ever have a free-market economy again) about 23%.
Then we add back a 23% sales tax.

Voila!! the final cost is about the same -- and you paid NO INCOME TAX!!!
-- and April the 15th is just another day !!.
Plus every family gets a check , similar to a Soc Sec check, to cover the 23% tax paid on some base level for "necessities" (food, etc).

The closest thing to a free lunch I ever saw.

Add to that the fact that the CORPORATE INCOME tax goes to **ZERO** and then the economic stimulus for investment, both domestic and foreign, would create an amazing engine for jobs and economic growth.

Sara - The FairTax is even easier since you would never have to file another IRS form...EVER!

Anon - I agree. We have pretty much the exact situation you describe because we end up transferring money from Mrs. TBF's bank account at work into our main bank account in order to pay our Swiss taxes. The forms make it look like we have equal amounts in each account - which never really happens.

Bob - Thanks for your explanation. I pretty much opted for the lazy way out by just saying that A.I. should read the Fair Tax book. The Fair Tax is bipartisan, and it is not a tax increase or tax cut - it's just tax replacement. Let's see, what else? Also, 40 million visitors to the U.S. each year, in a sense, become U.S. tax payers, and there's also the issue of the monthly "pre-bate" from the government to consider which makes it even more attractive to people who are currently spending everything they earn. Interested, A.I.? Read the book!