After visiting with the relatives in Kauhava for a few days, I took the train back to Helsinki. Mrs. TBF took the same 6:05 a.m. flight that morning that I had taken a few days earlier, and she met me at the train station.

Here are a few of my favorite photos: 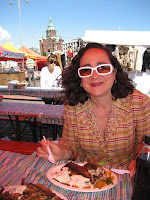 After dropping off the bags at our hotel, we went straight to the Kauppatori (market square) for some grub. It's a beautiful location right on the waterfront with lots of food stalls and vendors selling fish, vegetables, souvenirs, etc. However, one does need to watch out for the (very aggressive) seagulls. Those beasts will just swoop down and steal your food if you're not careful. Also, a couple of times while I was walking I heard a splat right next to me and realized that I had narrowly escaped one of their seagull bombs. The tent where we ate, along with all the other tents, were covered in seagull crap. We quickly ate Baltic herring and muikkut, and got the hell outta there... unsoiled!!! The Finns have got to do something about those damn birds! 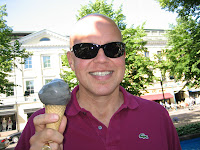 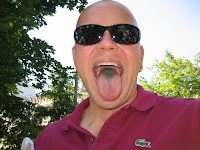 There aren't too many places in the world where one can buy salmiakki candies or ice cream. Best described as tasting like salty licorice, it is definitely an acquired taste. If you can convince yourself that your are not eating a scoop of sludge (or seagull shit) on a cone, it's really quite tasty. However, there is one nasty side effect: salmiakki tongue! 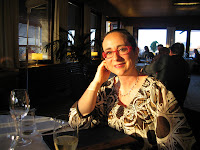 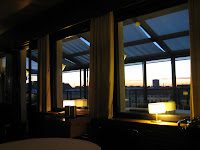 On Friday night, we had a nice meal at Ravintola Savoy. The restaurant interior was designed by Aino and Alvar Aalto, and it is protected landmark. Everything - even the chairs (although I assume they've been reupholstered) - is the same as it was when it opened in the late-1930s. I snapped the first photo when Mrs. TBF and I first sat down at 9:30 p.m. The second photo was taken at 11:15 p.m.

Overall, we had a relaxing, enjoyable weekend in Helsinki with one bit of adventure sandwiched in the middle. More about that later...
Posted by The Big Finn at 7/22/2009 04:55:00 AM

Salty licorice does not sound inticing, but Mrs. TBF looks quite fabulous with those red glasses and her hair pulled back. You should be lucky I am the way I am!