I saw quite a few of my relatives while in Finland. 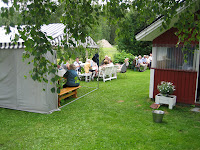 My grandmother had 16 children. Two of them died as infants, and three have passed away in the past few years. Of the other eleven, two (including my father) live in North America, and the other nine live in Finland. Of the nine who live in Finland, eight of them (one aunt couldn't make it because her husband was in the hospital) made it to a family get-together we had at my one aunt's house. 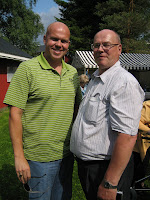 I tower over almost all of my relatives. I say "almost" because my dad has one brother who got most of the "big" genes in his family - my Uncle Laijo. Just look at his forearms! They're like logs!!! They make mine look like toothpicks. I wish I'd had a tape measure because I'm betting that his forearms are bigger than my thighs! Incidentally, when I was in Finland in 1966 as I was approaching four years old, I used to hang from his index finger! 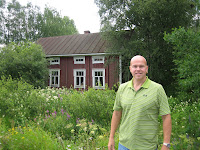 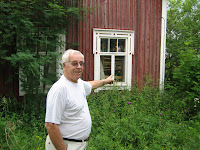 After our little reunion, we stopped at the house where my dad was born. I told him I wanted to physically touch it (which I did) - something I hadn't done since 1966! As we walked back to the car, my dad pointed to the corner of the house where he was born.

Email ThisBlogThis!Share to TwitterShare to FacebookShare to Pinterest
Labels: Finnish relatives, Kauhava, Laijo setä, the big genes, the house where my father was born