The day after Japandy, Mrs. TBF and I took off for Dublin.

How's this for bad luck? Ryanair used to have direct flights from Basel to Dublin. I say "used to" because they had them until July 1st. That's right, they discontinued the flights as of July 1st, so we opted to fly Aer Lingus out of Zürich.

It's the last time we'll do that.

Ok... I'll just admit blame by saying that it's my fault for not reading the fine print. Aer Lingus has a 6 kg. weight limit for carry-on bags. 6 KILOS!!!! That's about 13 lbs. I mean, my shoes weight nearly that much.

Naturally, we were both over the maximum allowed weight on our carry ons. So, we ended up having to check one bag. Not only that, but we then had to PAY 30 francs for the privilege of checking the bag. It was a total example of over-zealous, Swiss rule following. When we checked in with Aer Lingus in Dublin for the return flight home, they didn't even weigh our bags. Nope... they didn't care one bit. I mean, if it's a regulation size carry on bag.... WHO THE F#$% CARES HOW MUCH IT WEIGHS AS LONG AS YOU CAN LIFT IT INTO THE OVERHEAD COMPARTMENT YOURSELF???? Whether it weighs 5 lbs. or 25 lbs., IT STILL TAKES UP THE SAME AMOUNT OF ROOM!!!!!!!!

As a result, if I ever fly to Dublin from Basel again, I'll choose to fly BA or Lufthansa out of Basel... EVEN IF IT COSTS MORE!!! It's the principle of the thing.

The reason for our trip to Dublin was to see my sister, my Irish bro-in-law, and the kids who were in Dublin visiting Grandma Nellie. We stayed at The Westbury this time, and I won't go into details, but...

The Merrion (where we stayed last time) is MUCH nicer. The Westbury has a great location right on Grafton Street, but we'll stay at The Merrion again if we ever return to Dublin. 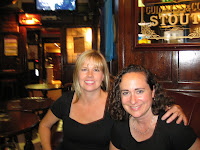 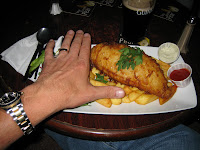 Our bro-in-law, Colm, was off fishing with his brother the day arrived, so my sister left the kids with Grandma Nellie and met us for dinner at a pub not too far from our hotel. We all enjoyed the pub food, and Mrs. TBF and I washed it down with Guinness - as you do in Ireland, right? Of course, my sister insisted on drinking Heineken. 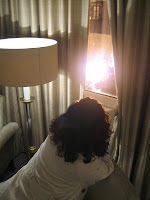 After returning to our room, we thought we'd open the curtains in order to check out the view.

They made us pay $20 to check in our bags on top of the additional fees they charged us before the flight for an international flight to SFO! Now that is horrible, not overweight or anything... I feel ya there!

Great tip about the hotel!

How did they end up busting you on your carry-on weight? I flew Aer Lingus back and forth to Dublin several times this year, and not once did anyone so much as eye my large carry-on suspiciously. Guess I got lucky!