Last Tuesday, at the butt-crack of dawn, I embarked on a 12+ hour journey from Basel to Kauhava, Finland. Kauhava is where my dad was born, and since my parents were spending some time there I figured I'd join them and visit with some of the relatives I haven't seen since 2005.

Those early-morning flights are killers. TBF does NOT recommend them!

I had some time to kill at Munich Airport, so I went into a barber shop and asked if they'd give me a shave. They seemed willing to do so until I told them that I wanted them to shave my head, and then they refused.

DISCRIMINATION AGAINST SLAPHEADS!!! Who do I talk to about that?

When I finally arrived in Helsinki, Finnish frugality took immediate hold of me because I took the Finnair bus from the airport (with a bunch of Japanese people) to the central train station (5.90 Euros instead of 40 Euros for a taxi). At the train station, I snapped right back into travel diva mode and bought a first class train ticket to Kauhava, looked at my watch, and realized that I had about two hours to kill before the 15:30 departure. The two hours were spent pretty much eating, drinking, and watching a bunch of people walking by - pretty much all of whom looked like they could have been related to me in some way.

The train ride was pretty uneventful, and I finally arrived in Kauhava around 6:45 p.m. Man, that was loooooooooooong trip!

I was met at the train station by my parents and one of my aunts. We went back to the apartment my parents were staying at, I had a bite to eat, watched some Finnish TV, and went to bed just after midnight. 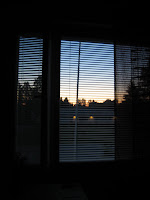 This (photo taken at 12:22 a.m.) is about as dark as it gets at night in July in Kauvaha, Finland. I forgot to bring a sleep mask, but don't worry - I didn't need one! I think I fell asleep about 10 seconds after my head hit the pillow!