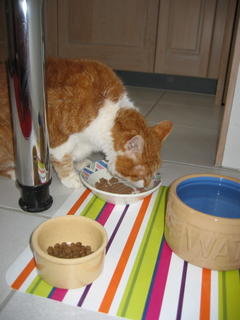 Iams called and they said that they're running out of food!
Just a little progress report on our cat - King. Since he began taking thyroid tablets three weeks ago, he's gained half a kilo (that's 1.1 lbs. for the folks in America). He seems much healthier than he was a month ago, and it looks like he's on the road to a full recovery. If things continue as they are, he should make it to November when we'll celebrate the 15-year anniversary of adopting him from the Save-A-Pet Adoption Center in Palatine, Illinois (now in Grayslake, IL).
Let me tell you, King won the kitty-lotto as far as we're concerned. We walked into the shelter in November, 1990, and a ray of light shined (shone?) through the window onto this huge orange tabby. I told Mrs. TBF: "That's my cat!" And...about forty-five minutes later...he was. He lived with us in our house in North Barrington, Illinois for almost nine years along with our other cats Binky and Zane (both deceased) and our dog Dominique (...welling up here!!!). In October, 2000, King and Dominique (...fighting back tears here!) flew over the ocean in the cargo hold of a Swissair plane while TBF relaxed in business class comfort (...still feeling a bit guilty about that one...not really!), and began their life in Switzerland. So, King went from sleeping in a shelter with an upper respiratory infection to living in a nice Swiss apartment with heated floors and all-the-food-he-can-eat!.
Now, if that's not winning the kitty-lotto, then I don't know what is!
Posted by The Big Finn at 7/21/2005 07:25:00 AM

i wish my kitty could come to switzerland but my mother has forbidden him to ride in the hold. i cry when i think about his twin brother so i understand the welling up part.
his twin was so spoiled he had his own bed. not a kitty bed, a bed.
the heated floors are the best though.