It Ain't Easy Being Green...In Switzerland!

St. Patrick's Day definitely is not the same event here in Switzerland that it is in Chicago. I'm sure the Irish Pub in Basel (Paddy Reilly's) is going gangbusters right about now - but that's about it. I'm sure that as I'm typing, the Chicago St. Patrick's Day parade is getting underway. Here in Basel...nothing. I guess I could go out and dump some green dye into the Birsig River next to the apartment (like they do in the Chicago River), but the current is so strong that the dye would disappear into the Rhein in a matter of minutes and be in Rotterdam within twenty-four hours. So...what's the point? 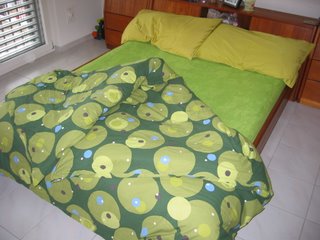 Well...here's what I did: instead of turning a river green, I decided to turn "the workbench" green. I'm not really sure why, but we have bed linens galore. I went through the inventory, and I was finally able to come up with a nearly totally green combo. OK...it's not really that big of deal, but Mrs. TBF seemed to think that it was "cute". 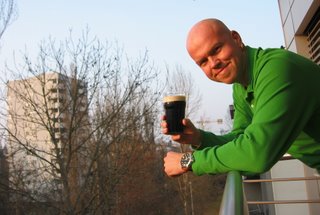 Although cabbage is widely available, I've never seen a big corned beef for sale in Switzerland, France, or Germany. That meant that corned beef and cabbage was out, and cabbage on its own doesn't really cut it. So, I ended up just settling for wearing a green shirt and drinking a Guinness on the balcony at sunset. OK...so it wasn't much, but at least I tried.

CS is dressed in green "by accident" today. I never thought of St. Patrick's Day until she came home. Guess I'm a bit out of tune, dressed in black and sipping a Cuba Libre...

But we'll be having an Irish coffee after dinner, that's for sure!

I LOVE the color of that shirt!

I thought your ideas were great. I didn't hear anything about celebrations but if I actually went to down town Vancouver, I would have seen a parade. I guess it's really big in Montreal too.

But I did wear green socks, underwear and a green shirt. Your color is much more pleasing than mine. Mine was dark green...

While I was in Switzerland, nobody said a word about St. PAtrick's day... Too bad. It's great to be in the spirit I think... although I've been told that these traditions are more from the US and Canada rather than in Ireland!

Awesome green workbench! As an expat you just have to do what you can, eh?

Did your pour that Guinness with the aid of a Surger?

I've just spotted the Surger concept on www.guinness.com and want one - but I bet I'll not find for sale in CH, and just as important, the special "Surger" beer in the CO-OP.

TBF: there is your next challenge -to find a supplier of "Surger beer" in Switzerland. You can do it knowing that you'll be improving the lives of countless ex-pats ;)

You're loving that GorillaPod aren't you!

Michael - Yes...I do love the Gorilla Pod. Thanks for the tip. The only problem is that my Canon Powershot S30 is a few years old and is slightly too heavy for the GP. I guess that means that the GP gives me a valid reason for buying a new, lighter camera.