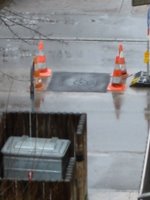 Swiss federal income taxes are due today! We paid ours two days ago, and the return has already been mailed in - thank you very much! Something that people in America and Canada might find interesting is that since we are "C permit" holders, Mrs. TBF has no withholding tax taken out of her monthly pay. That means we pay our federal taxes by March 31st, and we pay our kantonal/gemeinde taxes (kind of like state and city taxes) in one lump sum by September 30th. You read that correctly - we pay the bulk of our taxes in one payment in September! If you pay them early - you receive 1.5% interest. If you pay them late - you pay 4% interest. I find this to be absolutely amazing. What do you think would happen if the U.S. decided to stop withholding taxes while trusting the entire working population to begin keeping the tax money in their own account so that they could pay the entire amount all at once? I say that 90% of the population would have some "like...really awesome cars and plasma T.V.s", but then the government would go belly up within about a month because nobody would have money left over to pay their taxes. I guess it would be kind of difficult to fund the Iraq War and a manned spacecraft to Mars....(hmmm...on second thought...).
Although paying taxes isn't one of my favorite things in the world to do, it is nice to see that tax money is being put to use right in front of our apartment.
I, like my friends the Expatters, have noticed that Basel is suddenly inundated with road construction projects. Why? I have no idea. All I know is that we are the proud receipients of this road construction project which is clearly visible from our balcony.
I've noticed similar projects taking place all over town, and I have to admit that I'm a little perplexed. What EXACTLY is the point? Here's how I see this particular project:

People love to sit in the café and watch other people working - therefore these men are so busy hammering on the road... :-)