One Last Fleeting Memory From Rome...

It's been well over a week since we made it back from our little mini-vacation in Rome. Now that I think of it, not only did we have a great time in Rome, but we also managed to completely miss the snowstorm of the century that began clobbering Basel only a few hours after our EasyJet flight took off for Ciampino Airport. Imagine my surprise when, while stuffing my face with scrambled eggs and sausages at our "American breakfast" on Monday morning at the Hotel Majestic, I read in the IHT that Basel Airport had been completely shut down on Saturday and Sunday.

But hey, no problem. On arrival at Basel Airport, I walked out to the parking lot and found it to be pretty well cleared of snow. When I arrived at the Jeep, I found that it was covered with about a foot of melting snow. No problem. I just cleared the snow off the car Chicago-style which means that I went from 0 to 60 in about three seconds and then slammed on the brakes. Most of the snow slid onto the asphalt, I "four-wheeled it" over the mound of snow, and drove out of the parking lot to go pick up the rest of the gang at the arrival area. It was a piece of cake. However, special recognition and kudos have to go to DxDave who basically risked life and limb to drive over to our apartment during the storm to feed our cat. 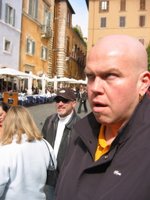 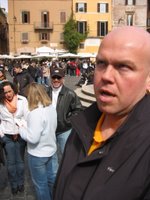 Anyhow...getting back to Rome. Sure, I have pictures galore of Roman sights. However, these two pictures quite possibly are my favorite pictures of the whole lot.
We were standing in Piazza della Rotonda in front of the Pantheon. Suddenly, my dear sister-in-law Renee decided to get all cerebral on my ass and she began reading historical/architectural/informational stuff about the Pantheon out of her guide. Now, it's a well documented fact that I have, as my ex-coworker Ed used to say, the "...attention span of a circus flea". So, I decided that it was a perfect time for a self-portrait.
You'll notice in the first picture, that everybody is oblivious to my shenanigans. However, in the second photo, while Renee is still oblivious to what I'm doing, Perry has begun to crack up, and Mrs. TBF...is beginning to give me the stink eye!!! It wasn't until I looked through the photos a few times that I noticed that I had captured "photographic gold".

So here are my top five Rome moments:

1. Speaking to the Swiss Guard in Swiss German.
2. Photo of Mrs. TBF giving me the stink eye.
3. Being excused from Church for the rest of my life by the Pope.
4. Reading in the IHT that we completely missed the snowstorm of the century.
5. The Colosseum, Vatican, Roman Forum, Pantheon, and all that other old stuff.

Don't worry about the stink-eye. Many people express love in many different ways...;-)

GREAT Pictures, it's the perfect way to remember Rome!

Don't worry my friends give me the same look when I pull out the camera.