We had a very international dinner party this past Saturday night:

It was like the stinkin' U.N.
First off, let me say that Mrs. TBF LOVES hosting dinner parties. She invites the people over, and then the next several weeks are spent pouring over her multitude of cookbooks while asking me questions that begin with "What do you think of...?" I learned very early on that "you decide..." wasn't an appropriate answer (Damn, those rolling pins hurt!), so now I add my two cents worth.
I'm not going to get into the details of what was served (Canadian-Swiss already did a pretty good job of that), but I will say that Mrs. TBF certainly had us all strap on the feedbags...as usual. And, damn fine feedbags they were. They had better have been - I FREAKIN' GROCERY SHOPPED FOR FIVE DAYS STRAIGHT!!! Not only did we eat very well, but we all also drank very well - as was evidenced by the amount of bottles I recycled this morning. 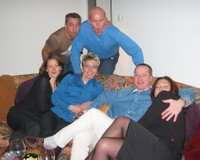 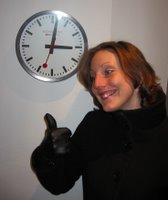 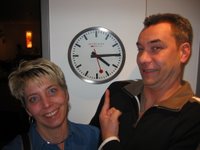 Since Canadian-Swiss posted so many photos, I'll just post a few. First, I managed to finally bring the camera out around midnight for a group photo (Orange-X and TBF looking like a couple of fish in the back row, ...and Charlotte, Canadian-Swiss, Peter, and Chris in the front row...and, minus Mrs. TBF for some reason!). Then, the camera came back out when Charlotte was leaving at around 3 a.m., and again shortly before Canadian-Swiss and Orange-X caught their taxi home at 4:15 a.m.! I have a feeling that the TBF abode is becoming a landmark for the taxi drivers of the greater Basel area. As an added bonus, Peter (...since he's Swiss) was able to speak to the dispatcher in proper Swiss-German as opposed to our usual guests who tend to speak in slurred, broken-German.
You know...it's amazing that Mrs. TBF and I have managed to keep off the weight with all the eating we've been doing. Last Friday, a bunch of us went to Gundeldingerhof for a multicourse dinner. Then, the next night, we went to a restaurant in Flüh called Säge (our new favorite Basel area restaurant) with Kirk and Gretchen. Next weekend, we'll be in Siena, Italy at a friend's 50th birthday bash.
...It's celery and water this week!
Posted by The Big Finn at 3/20/2006 04:45:00 PM

I hosted a Birthday Party for a friend on Saturday....I kicked everyone out at 9:30 pm becuase I was tired of everyone!

I was just looking through the photos on Canadian-Swiss's blog. You know what grabbed my attention? The liquor cabinet in the backgroung of that photo in which TBF and Charlotte (?) were dancing.

My God! I've never seen so many bottles in my life.

I'll be sending you a few more "good" photos. I think you'll be thankful that I didn't post them ;-)

Sal - You've been peekin' and NOT commenting?? BTW, they weren't dancing on that pict. Charlotte was demonstrating that she was not drunk and could touch her nose with her right hand (good start), and with her elbow, touch her left knee. Obviously, she was in a better state than we were ;-)

I especially enjoyed coming home to the message of all you telling me no over my answering machine.
Sounds like it was a great party

Sal...
I guess I have assembled quite a collection. Probably the most unusual liquer that we have is a Tyrni liquer from Finland. It's made from the arctic buckthorn.
I don't think you'll find that one in too many places outside of Finland!

TBF, next time we'll have that bottle. We talked about taking a shot, but we forgot (too much alcohol already?!). We had great fun and yes, the taxi driver found his way to your residence blind folded :-) Getting notorious over there!

OMG! How swiss is that! You have the official SBB Watch in your place :-)