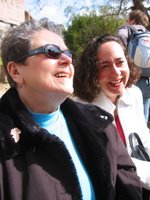 I took this picture of Mrs. TBF and Jo Mama (who we began calling Jo Mime-a because of her fascination with street mimes) during a short sitting break while soaking in the sunshine at the Roman Forum. The weather forecast called for rain, but we ended up having a good amount of sunshine. Roman weather forecasters must go to same meteorological school as Chicago weather forecasters. 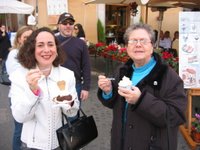 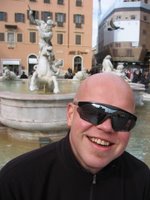 Later in the day, we went to Piazza Navona and stopped at the famous Tre Scalini - home of what our "Top 10 Rome" book describes as: "Rome's most sinful tartufo (truffle) ice cream ball...Dark chocolate shavings cover the outer layer of chocolate ice cream, with a heart of fudge and cherries."

TBF: "Hey Jo Mime-a...how do you say 'I bet it looks the same way when it's coming out' in Italian?"

LOL - I can't hold back, sorry TBF. I gotta laugh at the sun glasses. I remember when I thought oakley type glasses were so cool and I just wanted them. My parents wouldn't buy me a pair and then they kinda just disappeared from my "need" list... I think the google tan I got from swimming was enough to shy me away from those also...

Truffle ice cream sounds like a treat. We've got 4 gelato stores within four blocks of our house now. Just can't wait till it's warm enough to eat it.