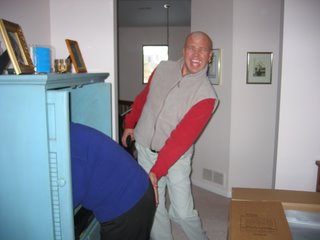 ...TBF boldy went where most son-in-laws dare not go!

Jo, Mrs. TBF's mom, needed a new TV. Her old TV had served her well throughout the years, but it had, over the previous few months, turned into an absolute piece of crap. I'd be watching TV with Jo, the picture would start to shake, Jo would get up, walk over to the TV, whack it a few times, and then it would be good for another five minutes. This ritual would be repeated about five times until the TV would go completely blank. At this point, the TV would have to be turned off. We'd have to go to another room to watch a tiny TV for about an hour, because that's how long it would take until the "big" TV would work again.

I have to admit that the TV ritual (which I had also witnessed during my prior two trips to Chicago) coupled with Jo's obssession with adjusting the thermostat every five to ten minutes, for me at least, was far more entertaining than anything the TV networks could ever come up with.

Eventually, her son (Colon Blow) and I decided that she was beginnning to wear out the carpet, and we finally talked her into getting a new TV. So, one Saturday afternoon, Jo and I went over to the local Best Buy to pick out a new TV. We found a nice TV for $165 with the help of one of the sales clerks. He was very helpful, but I had to step in when Jo decided to lecture the clerk (who was probably about eighteen years old) on the fact that she felt that her TV should have lasted for longer than it did, etc. at which point I pointed out to Jo that the sales clerk was probably in grade school when she had bought her TV and that it wasn't his fault. Realizing that this would be a good time to leave, AND that the TV wouldn't fit into the car, we decided to return the next day with Colon Blow and his trusty SUV.

The next day - December 11, 2005 - we brought the TV to the Jo's house without a hitch. C.B. and I carried it up the stairs, pulled it out of the box, and pulled the old TV out of the cabinet. At this point I saw about three inches of dust where the old TV had been, and I advised Jo that now might be a good time to do that "once per decade" dusting of the TV area. She agreed...

Now, "they" say that if you want to see what your wife will look like when she's old, then all you have to do is take a look at your mother-in-law. Now, I've seen Jo's face about a million times and I think it's safe to say that I think Mrs. TBF won't be too unpleasing to the eyes when she's in her 70s. However, curiosity got the best of me, and I decided (while Jo was dusting) to give her a bit of a "smack" so that I could see what the "booty" was going to feel like when Mrs. TBF is in her 70s. CB was ready with the camera...smack...flash!

My father always told me the same thing. If you want to say what you are in for, look at the mother. Of course this is also the same man who gave me this pearl when referring to women, "son, it (insert any inappropriate sexually charged female name) is all good, there is just some a little bit better." You know what, the more I think about it, the more I agree. Perhaps my dearly departed father is up there smiling right now. Of course this is the same man who used to call me Pony Pecker in front of my friends...

Geez, you pulled out a picture from 9 month ago? Must be a "slow news day" on The Big Finn's Big Blog!

Wait until I show Jo this!

Good idea with the Flashback Friday! BTW, I also don't think you have to worry about Mrs TBF's looks at age 70 :-)

There is another thing to worry about, though... Many people would find it rather disturbing to touch the bum of your mother-in-law while she is dusting. The French have certainly made films on the subject, I am sure...

Camping in the rain happens quite a bit in Scotland! Looking forward to the sun drenched Swiss climate once I move!

Flashback Friday? That's a good idea...I will have to steal it from you now!

Thanks for the tips TBF. I think I have to start a to do list for our December holidays in Canada:
1) Check for dust on and under the TV
2) Smack CS' mom on the back side
3) Make notes of the firmness.
4) Cross check CS' back side (again!)

I think all in all I don't have to worry either. CS' mom is a very slender woman, 5' tall, weighing approx. 50 kg.
Guess we can call ourselves lucky hubbies!;-)

oh geeze - looking at this pic makes me laugh so hard... you take the best people shots! Can't you just fly here for a few days so I can get that perfect shot for my photo class!